The name is an ironic commentary of the immigrant residents in the 18th and 19th centuries who had been dazzled by promotional promises of the supposed wonders of the land they were buying, reflecting their later relative disappointment.

Promised Land State Park was once the hunting grounds of the Lenape Indian tribe. Their land was part of the Province of Pennsylvania, established by King Charles II of England and under the leadership of William Penn. William Penn founded Pennsylvania as a colony where religious freedom was foundation of its establishment. The Shakers, a religious sect, from England migrated to the Thirteen Colonies and purchased some of the land in the Promised Land State Park area. It appears that they chose not to settle and instead sold off the land to lumbering operations that clear cut the land and sent the timber to the ship building docks in Philadelphia. The process of clear cutting the forests repeated itself several times until the land was acquired by the Commonwealth of Pennsylvania in 1902. The forestry department worked to re-establish the forests of the area. Promised Land State Park was opened to the public in 1905, becoming just the fourth state park in all of Pennsylvania. 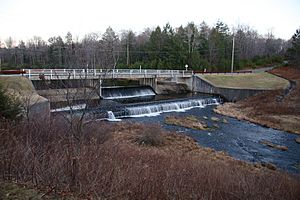 The spillway of a dam at Promised Land State Park.

Many of the park facilities in use today were constructed during the Great Depression of the 1930s by the young men of the Civilian Conservation Corps. The CCC was established by President Franklin D. Roosevelt to relieve the widespread unemployment what was brought about by the Depression. In exchange for a paycheck, food, and shelter, the men of the CCC worked to reclaim the forests. They built the roads and trails that cross the state forests. They also fought wild fires, planted trees, and built bridges on state roads.

Whittaker Lodge and the Bear Wallow Cabins were listed on the National Register of Historic Places in 1986 and 1987 for their architectural qualities and for their historical role in the park. 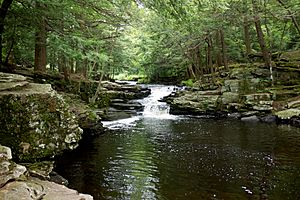 Since the forests have been allowed to regrow at Promised Land State Park it has become a center of diverse wildlife and ecosystems. The land on which it sits has largely very rocky and shallow soil with nutrient-poor bogs and dark evergreen forests. The poor quality of the soil and the bogs are a remnant of the vast glaciers that covered Pennsylvania during the last ice age. As the glaciers receded they scraped the earth and left a glacial till at the surface above the bedrock. This rocky soil drains poorly thereby creating the bogs that are spread throughout the park. The evergreen trees attract a variety of birds including, the red breasted nuthatch, Blackburnian warbler and northern waterthrush. Salamanders and wood frogs are drawn to the bogs to breed during the springtime.

While not all of the trees within the park are evergreen, many were before the lumber era. Some deciduous trees have grown at Promised Land State Park. These trees attract a different set of birds including the American redstart, Louisiana waterthrush and red-eyed vireo.

American black bears are a common sight at Promised Land State Park. They are attracted to the wide variety of plants, grasses and berries that are common in the park. Visitors to the park are cautioned to be extremely careful when encountering a black bear. Bears are generally shy and will avoid human contact, but bears that have been fed by and have been accustomed to human contact can become dangerous. They are very fast, as fast as a thoroughbred, strong and nimble. Bears also have a strong sense of smell. For this reason all visitors are asked to firmly secure all food products brought into the park and never to leave them out in the open overnight.

In addition to the bears, Promised Land State Park is also home to variety of other large woodland creatures. White tailed deer are a common sight in the park. Early morning visitors may come across groups of feeding wild turkeys. A wildlife observation deck is located on Lower Lake, from here visitors may see a variety of waterfowl species and even some bald eagles that have nested in the area within the last few years. Visitors are asked to not feed the wildlife. Feeding raccoons, squirrels and chipmunks may expose visitors to rabies. The feeding of Canada geese in the swimming area is discouraged due to the increased quantities of odorus fecal matter.

Promised Lake and Lower Lake are both popular fishing and ice fishing destinations. The common game fish are smallmouth and largemouth bass, catfish, crappie, pickerel, muskellunge, and yellow perch. Lower Lake is stocked by the Pennsylvania Fish and Boat Commission with brook, rainbow and brown trout. All anglers are expected to follow the rules and regulations of the Pennsylvania Fish and Boat Commission.

Hunting is permitted at Promised Land State Park. Hunters are expected to follow the rules and regulations of the Pennsylvania Game Commission. The common game species are turkey, white-tailed deer, and black bear. The hunting of groundhogs is prohibited.

There are 50 miles (80 km) of trails at Promised Land State Park and the nearby state forests that are open to hiking and in some locations, horseback riding, cross-country skiing, snowmobiling, and mountain biking. The trails pass through a variety of habitats and give visitors an opportunity to observe a diverse wildlife population.

Gas powered boats are prohibited on the lakes of Promised Land State Park. Electric powered and non powered boats must have a current registration with any state or a launch permit from the Pennsylvania Fish and Boat Commission. A concession is open on the shores of the lakes for renting canoes, kayaks and paddle boats. 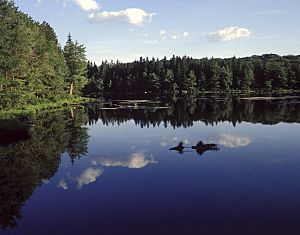 Visitors to Promised Land State Park who wish to stay overnight have a choice of staying in one of four campgrounds or in rustic cabins that were built during the Great Depression by the Civilian Conservation Corps.

The park's Masker Museum features exhibits about the Civilian Conservation Corps (CCC) and its work in the park. CCC exhibits include a barracks of beds, interactive stories, displays and artifacts. The museum also features natural history exhibits about the park's animals, plants and ecosystems. There are activities for children, a bird observation area of the outdoor feeding stations, and a native plant garden.

The following state parks are within 30 miles (48 km) of Promised Land State Park:

All content from Kiddle encyclopedia articles (including the article images and facts) can be freely used under Attribution-ShareAlike license, unless stated otherwise. Cite this article:
Promised Land State Park Facts for Kids. Kiddle Encyclopedia.