High Point State Park is a state park straddling the border of Wantage Township and Montague Township in Sussex County, within the Skylands Region of northwestern New Jersey, United States, near the border with New York State and Pennsylvania. The park covers 15,413 acres (62.37 km2). Part of the Kittatinny Mountains, the highest point in the state of New Jersey, the aptly named High Point, sits in the northern reaches of the park, at elevation 1,803 feet (550 m). Route 23 skirts the park and provides access for visitors from the New Jersey suburbs and from points in New York. The park is administered by the New Jersey Division of Parks and Forestry.

Entrance fees are only charged from Memorial Day weekend to Labor Day: $5.00 on weekdays and $10.00 on weekends.

High Point Monument, built at the summit, offers views of farmland and forest, hills and valleys in three states, out to the Delaware Water Gap National Recreation Area, where the Delaware River separates the ridges of New Jersey from those of Pennsylvania. High Point offers trails for hiking and cross-country skiing and areas for camping and fishing.

The land for High Point State Park, donated by Colonel Anthony R. and Susie Dryden Kuser, was dedicated as a park in 1923. The pleasant landscaping was designed by the Olmsted Brothers of Boston, a prominent landscape architectural firm of that time. The brothers were the sons of Frederick Law Olmsted, who designed Central Park.

To the south, the Appalachian Trail follows a rocky ridge which has views of the valleys and mountains surrounding the area. To the north, the trail drops off the ridge through hemlock gorges into former agricultural fields with a view of the surrounding countryside and the High Point Monument in the distance. 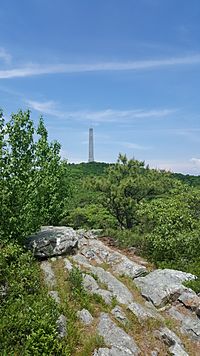 The monument was built to honor war veterans, through the generosity of the Kusers. Construction began in 1928 and completed in 1930. At the top of the 220 feet (67 m) structure (the base is 34 square feet (3.2 m2)), observers have views of the ridges of the Pocono Mountains toward the west, the Catskill Mountains to the north and the Wallkill River Valley in the southeast. At the top of New Jersey's tallest knob, the Monument is an obelisk monument similar to other war monuments, such as the one located on Breed's Hill in Massachusetts.

All content from Kiddle encyclopedia articles (including the article images and facts) can be freely used under Attribution-ShareAlike license, unless stated otherwise. Cite this article:
High Point State Park Facts for Kids. Kiddle Encyclopedia.