Port Jervis is a city on the Delaware River in western Orange County, New York, with a population of 8,828 at the 2010 census. The communities of Deerpark, Huguenot, Sparrowbush, and Greenville are adjacent to Port Jervis, and the towns of Montague, New Jersey and Matamoras, Pennsylvania face the city across the respective state borders. From late spring to early fall many thousands of travelers and tourists pass through Port Jervis on their way to enjoying rafting, kayaking, canoeing and other activities in the Delaware Water Gap National Recreation Area and the Upper Delaware Scenic and Recreational River and the surrounding area.

In August 2008, Port Jervis was named one of "Ten Coolest Small Towns" by Budget Travel magazine.

The first fully developed European settlement in the area was established c.1690, and a land grant of 1,200 acres (490 ha) was formalized on October 14, 1697. The settlement was originally known as Mahackamack, which was its name when it was raided and burned in the American Revolutionary War by British forces under the command of Joseph Brant before the Battle of Minisink in 1779. Over the next two decades, the settlement was rebuilt and more roadways were developed to better connect Mahackamack with the eastern parts of Orange County.

After the Delaware and Hudson Canal was opened in 1828, providing transportation of coal from northeastern Pennsylvania to New York and New England via the Hudson River, trade brought money and further development to the area. A village was incorporated in 1853, and was renamed Port Jervis in the mid-19th century, after John Bloomfield Jervis, the D&H Canal's chief engineer. Port Jervis grew steadily into the 1900s, and on July 26, 1907, it became a city.

A view of Port Jervis showing the Mid-Delaware Bridge to Matamoras, Pennsylvania on the far right and New Jersey's High Point on the Kittatinny Ridge on the far left 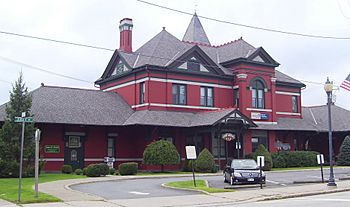 The Erie Depot, built in 1892, was the largest station on the Erie Railroad's Delaware Division. The Erie ceased long distance passenger service in 1970. The depot was recently restored.

Coming of the railroad

The first rail line to run through Port Jervis was the New York & Erie Railroad, which in 1832 was chartered to run from Piermont, New York, on the Hudson River in Rockland County, to Lake Erie. Ground was broken in 1835, but construction was delayed by a nationwide financial panic, and did not start again until 1838. The line was completed in 1851, and the first passenger train – with President Millard Fillmore and former United States Senator Daniel Webster on board – came through the city on May 14. The railroad went through a number of name changes, becoming the Erie Railroad in 1897.

A second railroad, the Port Jervis and Monticello Railroad, later leased to the New York, Ontario and Western Railway (O&W), opened in 1868, running north out of the city, and eventually connecting to Kingston, New York, Weehawken, New Jersey and western connections.

Like the D&H Canal, the railroads brought new prosperity to Port Jervis in the form of increased trade and investment in the community from the outside. However, the competition that the railroad brought also hastened the decline of the canal, which ceased operation in 1898, and the railroads were the basis of the city's economy for the coming decades. Port Jervis became Erie's division center between Jersey City, New Jersey and Susquehanna, Pennsylvania, and by 1922, twenty passenger trains went through the city every day, and over 2,500 Erie employees made their homes there.

The railroads themselves began to decline after the Great Depression, accelerating after World War II with the building of the Interstate Highway System and increased competition from trucking companies. One of the first Class I railroads to shut down was the O&W, in 1957, leaving Port Jervis totally reliant on the Erie. Only a few years later, in 1960, the Erie, also on a shaky financial footing, merged with Delaware, Lackawanna and Western Railroad to become the Erie Lackawanna. In 1976, along with a number of other struggling railroads, such as the Penn Central, the Erie Lackawana became part of Conrail. Since the breakup of Conrail, the trackage around Port Jervis has been controlled by Norfolk Southern. The decline of the railroads was an economic blow to Port Jervis, one it is still, as of 2011, recovering from. 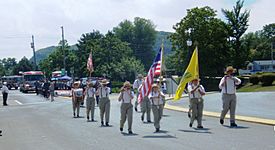 Being situated at the confluence of the Delaware and Neversink Rivers has sometimes led to flooding problems. In one such instance associated with the 1955 Hurricane Diane, a flood-related rumor started a panic that was later studied in a 1958 report issued by the National Research Council called "The Effects of a Threatening Rumor on a Disaster-Stricken Community".

In addition to having flooded during periods of heavy rainfall, at times ice jams have effectively dammed the Delaware, and in 1875 floes destroyed the existing bridge to Matamoras. In 1981 a large ice floe resulted in the highest water crest measured to date at the National Weather Service's Matamoras river gage 26.6 feet (8.1 m). 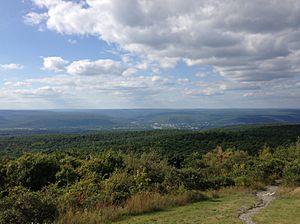 There were 3,533 households out of which 32.4% had children under the age of 18 living with them, 39.9% were married couples living together, 15.6% had a female householder with no husband present, and 38.9% were non-families. 32.6% of all households were made up of individuals and 15.1% had someone living alone who was 65 years of age or older. The average household size was 2.48 and the average family size was 3.15. 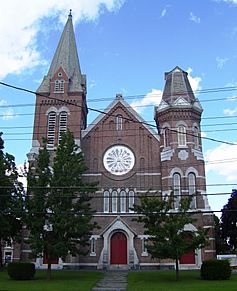 The Deerpark Reformed Church on East Main Street was originally organized in 1737, making it the oldest congregation in the area. The current building dates from 1838.

Port Jervis lies near the points where the states of New York, New Jersey and Pennsylvania come together. South of the Laurel Grove Cemetery, under the viaduct for Interstate 84, are two monuments marking the boundaries between the three states.

The larger monument is a granite pillar inscribed "Witness Monument" and dated 1882. It is not on any boundary itself, but instead is a witness for two boundary points. On the north side (New York), it references the corner boundary point between New York and Pennsylvania that is located in the center of the Delaware River 475 feet (145 m) due west of the Tri-State Rock. On the south side (New Jersey), it references the Tri-State Rock 27.5 feet (8.4 m) to the south. 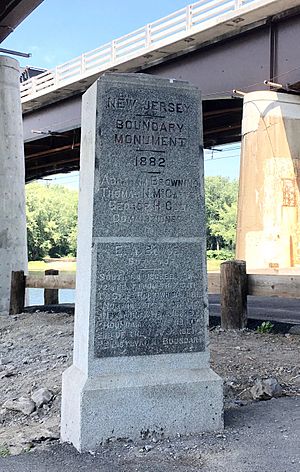 The smaller monument, the Tri-State Rock, marks both the northwest end of the New Jersey and New York boundary and the north end of the New Jersey and Pennsylvania boundary. It is a small granite block with inscribed lines marking the boundaries of the three states and a bronze National Geodetic Survey marker at the triple point, where you can stand in three states at once. It also marks the northernmost point of New Jersey. The current Tri-State Monument is a replacement for the original monument erected in 1774, which was important in resolving the New York - New Jersey Line War. 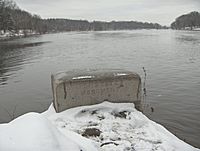 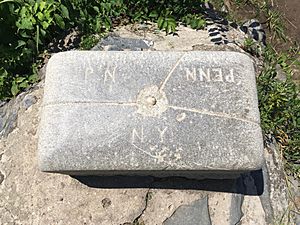 Top of the Tri-States Boundary Marker with the bronze National Geodetic Survey marker vandalized off, showing the state line engraving.

Port Jervis is the last stop on the 95-mile-long (153 km) Port Jervis Line, which is a commuter railroad service from Hoboken, New Jersey and New York City (via a Secaucus Transfer) that is contracted to NJ Transit by the Metro-North Railroad of the Metropolitan Transportation Authority. The track itself continues on to Binghamton and Buffalo, but passenger service west of Port Jervis was discontinued in November 1966.

All content from Kiddle encyclopedia articles (including the article images and facts) can be freely used under Attribution-ShareAlike license, unless stated otherwise. Cite this article:
Port Jervis, New York Facts for Kids. Kiddle Encyclopedia.