Deerpark is a town in the western part of Orange County, New York. As of the 2010 Census, the population was at 7,901. The center of population of New York is located in Cuddebackville, a hamlet in Deerpark.

Dutch colonists attempted to settle the town in the 17th Century. The town was organized in 1798 after Port Jervis was set apart from the territory. The town was part of the boundary dispute between New York and New Jersey, which was not settled until 1773.

The former Delaware and Hudson Canal ran through the town.

The southwest town line is the border of Pennsylvania, marked by the Delaware River. The western and northern town lines are the border of Sullivan County, New York. The Neversink River flows through the town. The city of Port Jervis is located in the southern corner of the town, and a small portion of the town borders on Montague Township, New Jersey.

US Route 209 parallels the course of the Neversink River. The Hawk's Nest scenic overlook along New York State Route 97 offers views of the Delaware River. Interstate 84 passes through the southern portion of town near the New Jersey state line.

There were 2,906 households out of which 35.7% had children under the age of 18 living with them, 58.4% were married couples living together, 9.0% had a female householder with no husband present, and 27.2% were non-families. 20.9% of all households were made up of individuals and 7.9% had someone living alone who was 65 years of age or older. The average household size was 2.70 and the average family size was 3.12. 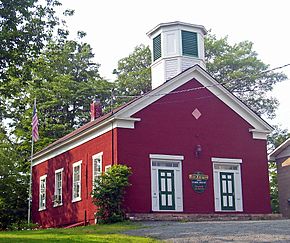 The Huguenot Schoolhouse, now the historical museum of Deerpark

All content from Kiddle encyclopedia articles (including the article images and facts) can be freely used under Attribution-ShareAlike license, unless stated otherwise. Cite this article:
Deerpark, New York Facts for Kids. Kiddle Encyclopedia.