Kids Encyclopedia Facts
This page is about the Pocono ski resort. For the mountain in Arizona, see Camelback Mountain.

Camelback Mountain Resort is a ski and snowboard resort located in the Pocono Mountains region in Pocono Township and Jackson Township, Monroe County, Pennsylvania, adjacent to, and partially within Big Pocono State Park. In the 1950s when developers were working to expand the original solitary ski run, they negotiated with the then PA DER for permission to use a small portion of the state park for the ski area in exchange for $1 a year and the obligation to maintain the entire park. 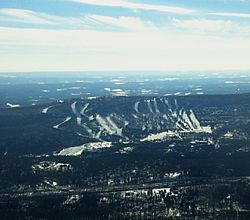 Camelback Ski Area in the Winter.

Camelback Mountain (Big Pocono) itself reaches an elevation of 2,133 feet (650 m). There are 166 acres (67 hectares) of skiing & snowboarding terrain; the mountains have a total of 35 slopes (the longest of which is 1 mile(1,609 m), namely, the Nile Mile) and features a vertical drop of 800 ft (244 m), 15 lifts, including 2 high speed detachable chairlifts; the Sullivan Express and Stevenson Express, both quads. It is the largest ski resort in the Poconos. It has two terrain parks. The resort was opened in December 1963. The mountain summit receives an average of 50 in (127 cm) of snowfall each winter. It has snowmaking facilities on ski slopes, primarily relying on portable snow guns to create snow, and is 100% lit for night skiing.

In May 2015 Camelback opened Camelback Resort and Indoor Waterpark. An additional attraction was added with Camelback Mountain Adventures.

Camelback invested in their educational ski and snowboard programs. They use the marketing term, Learn Here, Learn Right.

Camelback Resort and Indoor Waterpark was opened in 2015. Their waterpark, known as Aquatopia, was voted the #1 Indoor Waterpark in the country by USA Today for 2015. The indoor park is open year-round while the outdoor park is open only in the summer. Aquatopia includes over 37 waterslides (the most in Pennsylvania), including four body slides, a mat slide, five tube slides and four raft rides, in addition to a 30,000-square-foot (2,800 m2) wave pool, lazy river, a children's play area, and a full-sized competition pool. Aquatopia also features the FlowRider, a wave riding pool for surfing and boogie boarding. 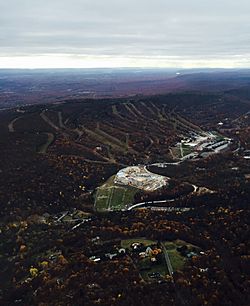 According to the Trewartha climate classification system, Camelback Mountain Resort has a Temperate Continental climate (Dc) with warm summers (b), cold winters (o) and year-around precipitation (Dcbo). Dcbo climates are characterized by at least one month having an average mean temperature ≤ 32.0 °F (0.0 °C), four to seven months with an average mean temperature ≥ 50.0 °F (10.0 °C), all months with an average mean temperature < 72.0 °F (22.2 °C) and no significant precipitation difference between seasons. Although most summer days are comfortably humid at Camelback Mountain Resort, episodes of heat and high humidity can occur with heat index values > 93 °F (34 °C). Since 1981, the highest air temperature was 95.4 °F (35.2 °C) on 07/22/2011, and the highest daily average mean dew point was 70.7 °F (21.5 °C) on 08/01/2006. July is the peak month for thunderstorm activity which correlates with the average warmest month of the year. The wettest month of the year is September which correlates with tropical storm remnants during the peak of the Atlantic hurricane season. Since 1981, the wettest calendar day was 6.77 inches (172 mm) on 09/30/2010. During the winter months, the plant hardiness zone is 6a with an average annual extreme minimum air temperature of −9.4 °F (−23.0 °C). Since 1981, the coldest air temperature was −21.6 °F (−29.8 °C) on 01/21/1994. Episodes of extreme cold and wind can occur with wind chill values < −22 °F (−30 °C). The average snowiest month is January which correlates with the average coldest month of the year. Ice storms and large snowstorms depositing ≥ 12 inches (30 cm) of snow occur nearly every year, particularly during nor’easters from December through March.

All content from Kiddle encyclopedia articles (including the article images and facts) can be freely used under Attribution-ShareAlike license, unless stated otherwise. Cite this article:
Camelback Mountain Resort Facts for Kids. Kiddle Encyclopedia.