Pocono Pines is a census-designated place (CDP) in Monroe County, Pennsylvania, United States. The population was 1,409 at the 2010 census.

Pocono Pines is located in the heart of the Pocono Mountains and is home to the communities of Lake Naomi and Pinecrest Lake. Most of the land was originally owned by the Miller family. Frank C. Miller, his brother Rufus W. Miller, and others, bought lands on Tunkhannock Creek in Tobyhanna Township, Monroe County, Pennsylvania, organized a corporation known as the Pocono Spring Water Ice Company sometime in the 1890s. In September 1895, a 14-foot (4.3 m) dam was constructed across the creek and water began backing-up forming "Lake Naomi", a lake more than a mile long and about one-third of a mile wide. The Ice Company was granted a 99-year lease for "the exclusive use of the water and its privileges." It was chartered for the purpose of "erecting a dam, for pleasure, boating, skating, fishing and the cutting, storing and selling of ice." 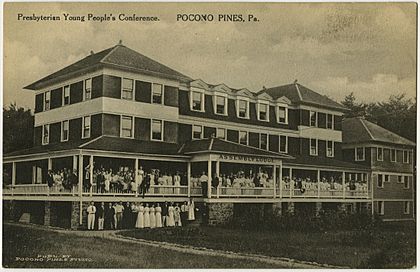 A Presbyterian Young People's Conference held at Assembly Lodge in Pocono Pines, on an early postcard

In 1902, visitors came from many of the surrounding metropolitan areas including New York City and Philadelphia. In the same year, the first bathing beach was created and some lots on the north side of the lake were subdivided and sold to summer cottagers. A sailing camp for girls was set up on the northwest side of the lake. A Lutheran retreat, Lutherland, was erected on the southern side of the lake. The Millers and others utilized the southern and eastern sides of the lake for swimming, sailing, skating, fishing. In 1921, a boathouse and beach were constructed on the site of today's Lake Naomi Clubhouse. In 1938, a famous Pennsylvania Supreme Court case took place over who owned the water rights to Lake Naomi, as the surrounding lands were soon owned by many different parties.

In 1963, the Logan Steele family purchased 2,600 acres (11 km2) surrounding the lake which eventually was turned into a resort community called the Lake Naomi Club. Logan Steel died in the 1980s, and the club is now owned by its members and run by a board of governors. Lake Naomi Club today includes 1400 families who own property surrounding Lake Naomi. Lake Naomi itself is a 277-acre (1.12 km2) lake with private beaches and marinas. The Club has a very active sailing organization, 3 pools including a 50-meter outdoor Olympic-sized pool with a scenic view of the lake, 18 tennis courts, and full service clubhouse.

There is another community center that lies directly across from Timber Trails (a branch off Lake Naomi) that was completed and opened Memorial Day weekend of 2007 for all community members to enjoy.

Across the street is Pinecrest Lake, another resort community.

Eventually, Naomi Pines was renamed Pocono Pines. The main thoroughfare through the current Village of Pocono Pines is Route 940 on is the intersection of 'Old' 940, Route 940, and Route 423, where one can find one traffic light with one gas station and a few surrounding businesses.

There were 437 households, of which 24.7% had children under the age of 18 living with them, 55.4% were married couples living together, 9.8% had a female householder with no husband present, and 31.6% were non-families. 27.9% of all households were made up of individuals, and 10.8% had someone living alone who was 65 years of age or older. The average household size was 2.32 and the average family size was 2.78.

All content from Kiddle encyclopedia articles (including the article images and facts) can be freely used under Attribution-ShareAlike license, unless stated otherwise. Cite this article:
Pocono Pines, Pennsylvania Facts for Kids. Kiddle Encyclopedia.