Jim Thorpe is a borough and the county seat of Carbon County in the U.S. state of Pennsylvania. The population was 4,781 at the 2010 census. The town has been called the "Switzerland of America" due to the picturesque scenery, mountainous location, and architecture; as well as the "Gateway to the Poconos." It is in eastern Pennsylvania about 80 miles (130 km) north of Philadelphia and 100 miles (160 km) west of New York City. This town is also historically known for burying the body of Native American sports legend Jim Thorpe. 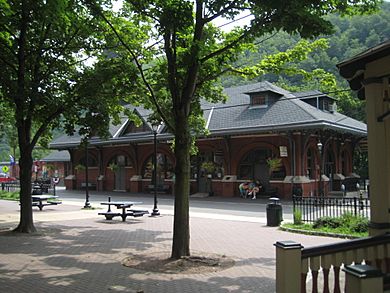 Train station built and operated by the LC&N subsidiary Lehigh and Susquehanna Railroad.

Jim Thorpe was founded as Mauch Chunk /ˌmɔːk ˈtʃʌŋk/, a name derived from the term Mawsch Unk (Bear Place) in the language of the native Munsee-Lenape Delaware peoples: possibly a reference to Bear Mountain, an extension of Mauch Chunk Ridge that resembled a sleeping bear, or perhaps the original profile of the ridge, which has since been changed heavily by 220 years of mining. The company town was founded by Josiah White and his two partners, founders of the Lehigh Coal & Navigation Company (LC&N). The town would be the lower terminus of a gravity railroad, the Summit Hill & Mauch Chunk Railroad, which would bring coal to the head of the Lehigh Canal for transshipment to the Delaware River, 43 kilometres (26.7 mi) downstream. It would thereby connect LC&N's coal mines to Philadelphia, Trenton, New York City, and other large cities in New Jersey and Delaware, and by ocean to the whole East Coast.

The town grew slowly in its first decade, then rapidly became larger as a railroad and coal-shipping center. (The other large city with coal mining was Scranton, with a population of over 140,000.) Mauch Chunk is on a flat at the mouth of a right bank tributary (facing downstream) of the Lehigh River at the foot of Mount Pisgah.

The left bank community East Mauch Chunk, which has more of the houses of modern Jim Thorpe, was settled later to support the short-lived Beaver Creek Railroad, the mines which spawned it, and the logging industry. It only came into its growth when the Lehigh Valley Railroad pushed up the valley to oppose LC&N's effective transportation monopoly over the region, which extended across to northwest Wilkes-Barre at Pittston on the Susquehanna River/Pennsylvania Canal. (See Lehigh and Susquehanna Railroad, a subsidiary of LC&N.)

After the Pennsylvania Canal Commission smoothed the way, LC&N built the Lehigh and Susquehanna Railroad (L&S) from Pittston to Ashley, building the Ashley Planes inclined railway and linked that by rail from Mountain Top to White Haven at the head of the canal's upper works—referred to as the "Grand Lehigh Canal"—which navigations shortened the Lehigh Gorge (now located in the Lehigh Gorge State Park) route, cutting the distance from Philadelphia to Wilkes-Barre and the Wyoming Valley coal deposits by over 100 miles (160 km). This placed Mauch Chunk in the center of a nexus of transportation in country tough to travel through. When floods wiped out many of the upper Lehigh Canal works in 1861, the L&S Railroad was extended through the gap, and the so-called switchback-twisted backtrack through Avoca, with the improved engines of the day, enabled two-way steam locomotive traction and traffic despite the steep grades. The LC&N headquarters was built across the street from the stylish passenger station that was soon boarding passengers onto trains from New York and Philadelphia to Buffalo. 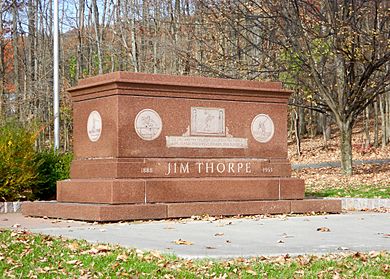 Following the 1953 death of renowned athlete and Olympic medal winner Jim Thorpe, Thorpe's widow and third wife, Patricia, was angry when the government of Oklahoma would not erect a memorial to honor him. When she heard that the boroughs of Mauch Chunk and East Mauch Chunk were desperately seeking to attract business, she made a deal with civic officials. According to Jim Thorpe's son, Jack, Patricia was motivated by money in seeking the deal. The boroughs merged, renamed the new municipality in Jim Thorpe's honor, obtained the athlete's remains from his wife and erected a monument to the Oklahoma native, who began his sports career 100 miles (161 kilometres) southwest, as a student at the Carlisle Indian Industrial School in Carlisle, Pennsylvania. The monument site contains his tomb, two statues of him in athletic poses, and historical markers describing his life story. The grave rests on mounds of soil from Thorpe's native Oklahoma and from the Stockholm Olympic Stadium in which he won his Olympic medals. 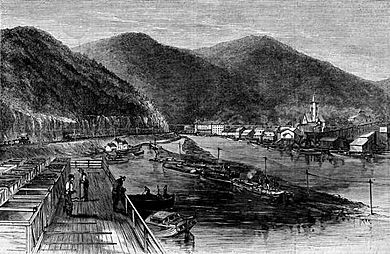 On June 24, 2010, one of Jim Thorpe's sons, Jack Thorpe, sued the town for his father's remains, citing the Native American Graves Protection and Repatriation Act, which is designed to return Native American artifacts to their tribal homelands. On February 11, 2011, Judge Richard Caputo ruled that Jack Thorpe could not gain any monetary award, nor any amount for attorney's fees in the lawsuit and that for the lawsuit to continue other members of the Thorpe family and the Sac and Fox Nation would have to join him as plaintiffs. Before Jack Thorpe could respond to the ruling he died at the age of 73 on February 22, 2011. Because of his death his representatives were given more time to respond to the ruling. On May 2, 2011, William and Richard Thorpe, Jim Thorpe's remaining sons and the Sac & Fox Nation of Oklahoma joined the lawsuit, allowing it to continue. On April 19, 2013, Federal Judge Richard Caputo ruled in favor of William and Richard Thorpe, ruling that the borough amounts to a museum under the law. This ruling was reversed by the United States Court of Appeals for the Third Circuit on October 23, 2014. The US Supreme Court refused to hear their appeal on October 5, 2015 assuring that Jim Thorpe's remains will stay in Carbon County. 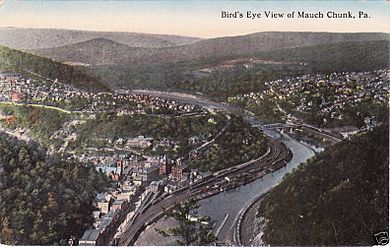 1915 postcard showing a bird's eye view of the community

The history of the borough is reflected in the architecture that makes up its many 19th century styles. A former resident and architectural historian, Hans Egli, noted the vast range of styles: Federalist, Greek Revival, Second Empire, Romanesque Revival, Queen Anne, and Richardsonian Romanesque. Most of these architectural examples remained intact beneath aluminum or vinyl siding that has since been removed.

Robert Venturi, a renowned Philadelphia architect, conducted a little-known planning study in the 1970s that attempted to understand the dynamics of historicism and tourism, notions that have come into their own in contemporary times. While Venturi's planning study was unique at the time, it has since become a critical factor in Jim Thorpe's rebound as a functioning and economically stable community. Jim Thorpe tourism is based on its old architecture, and recreation such as hiking, paintball and white water rafting.

In 1827, the Lehigh Coal & Navigation Company, a coal mining and shipping company with operations in Summit Hill, Pennsylvania, constructed an 8.7-mile (14.0 km) downhill track, known as a gravity railroad, to deliver coal (and a miner to operate the mine train's brake) to the Lehigh Canal in Mauch Chunk. This helped open up the area to commerce, and helped to fuel the Industrial Revolution in the United States. By the 1850s, the "Gravity Road" (as it became known) was providing rides to thrill seekers for 50 cents a ride (equal to $11.4 today). It is often cited as the first roller coaster in the United States. The Switchback Gravity Railroad Foundation was formed to study the feasibility of preserving and interpreting the remains of the Switchback Gravity Railroad on top of Mount Pisgah. 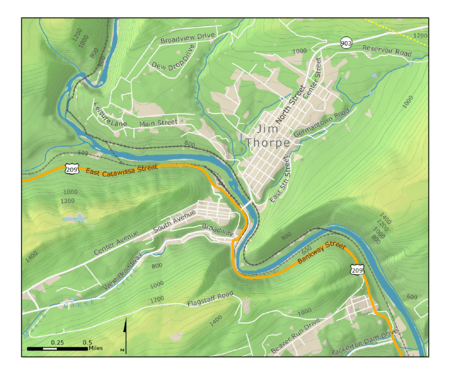 Jim Thorpe lies in the shadow of Mount Pisgah at the end of Pisgah Mountain (Pisgah Ridge), upriver of the Lehigh Water Gap between Bear Mountain on the east/left bank and the valley of Mauch Chunk Creek on the right bank.

In the deeps of the geologic timescale the two shorelines of the Lehigh River occupied by the 19th-century towns of Mauch Chunk and East Mauch Chunk were situated on the bottom of an ancient river-fed tarn, a mountain lake which filled the valley on the west bank and covered the relative flatlands on the east bank. The muddy bottom of that high tarn (the range then rivaling the Himalayas in size), where the waters pooled at a lower elevation amongst the twisted folds of four near-parallel ridgelines, created a level region whose settlements became the relatively flat lands on either bank of the Lehigh. The ridgelines, which run east-northeast to west-southwest, are (from north to south) Broad, Nesquehoning, Pisgah, and Mauch Chunk ridges (or Mountains)—each of which runs over 15 miles (24.1 km) west to the gaps cut by the Schuylkill River.

According to the United States Census Bureau, the borough of Jim Thorpe has a total area of 14.9 square miles (38.6 km2), of which 14.6 square miles (37.8 km2) is land and 0.3 square miles (0.8 km2), or 2.15%, is water. Jim Thorpe is 3 miles (5 km) north and upstream of Lehighton, below the Lehigh Gap which sunders Bear Mountain on the east bank from the extended ridge of Mauch Chunk Mountain. The town is 4 miles (6 km) east of Nesquehoning, which is up a steep grade and around the bend along U.S. 209 South, and also butting up against the slopes of Mount Pisgah. This was a key element in the LC&N's planning, for the grade from the mountain ridge down to the river enabled them to fill barges quickly, using chutes and an elevated entry from a road down the ridge face. Jim Thorpe's developed elevations range between the river slack water at 540 feet (160 m) above sea level—720 feet (219.5 m) to the town's upper streets, all below the western peak of Mount Pisgah, which tops out at 1,519 feet (463.0 m) above sea level.

The elevation of the Borough of Jim Thorpe ranges from 540 feet (160 m) at Broadway and Hazard Square downtown to 1,700 feet (520 m) above sea level 3 miles (5 km) northeast of the borough center near the Penn Forest Township line.

US 209, although signed as a north-south route, tends to follow an east-west route in Pennsylvania. In Jim Thorpe and Lehighton, U.S. 209 runs in directions opposite its signage—i.e., northbound U.S. 209 runs southwards and vice versa. 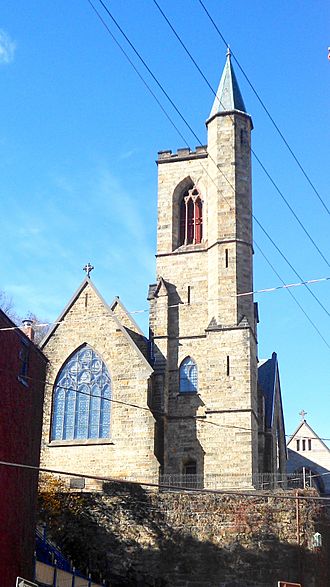 In a poll conducted in 2009 by Budget Travel magazine, Jim Thorpe was awarded a top 10 spot on America's Coolest Small Towns. The town registered 3,920 votes to land the #7 spot on the list. In 2012, Jim Thorpe was voted the fourth most beautiful small town in America in the Rand McNally/USA Today Road Rally series. Jim Thorpe is becoming a tourist destination, with many businesses catering to white water rafting, mountain biking, paintball and hiking. Trails in Lehigh Gorge State Park attract hikers from all over, with Glen Onoko Falls a top trail destination just north of downtown. Along with these sports, Jim Thorpe is popular among railroading fans and is known for its extraordinary architecture.

Jim Thorpe is home to the Anthracite Triathlon, an Olympic-distance triathlon open to amateur and professional triathletes. The swimming portion occurs in Mauch Chunk Lake. The bike course takes riders through the mining towns of Summit Hill, Nesquehoning, Lansford and Jim Thorpe. The running portion of the course is generally along the former alignment of a historic switchback railroad.

The Anita Shapolsky Art Foundation was established at 20 West Broadway, in a 10,000-square-foot (930 m2) 1859 former Presbyterian church, in Jim Thorpe in 1998. There, through the non-profit 501(c)3 organization, Anita Shapolsky exhibits abstract artists and contemporary artworks during the summer, and provides educational programs for children.

All content from Kiddle encyclopedia articles (including the article images and facts) can be freely used under Attribution-ShareAlike license, unless stated otherwise. Cite this article:
Jim Thorpe, Pennsylvania Facts for Kids. Kiddle Encyclopedia.