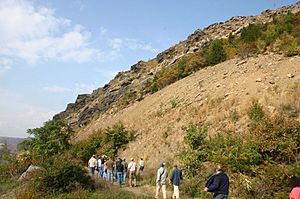 Exposure of the Shawangunk Formation at Lehigh Gap, facing north, 2006

The Lehigh Gap, is a water gap located in the townships of Lehigh, Washington, Lower Towamensing and East Penn in the Lehigh Valley that was formed by the Lehigh River where it cuts through the Blue Mountain in the state of Pennsylvania in the United States. The gap allows easy travel between Carbon County to the north and Lehigh and Northampton counties to the south of the mountain. One of the more distinctive features of the gap is Devil's Pulpit, a rock formation that reminds hikers of a pulpit. Lehigh Gap is also the name of a village also known as Weider's Crossing and located at the south end of the gap in Lehigh and Northampton Counties.

Pennsylvania Route 248 runs directly through the gap, connecting the two Lehigh Valley cities Allentown and Bethlehem to the smaller Carbon County boroughs of Palmerton, Bowmanstown and Lehighton. State Routes 873 and 145 connect to Route 248 just south of the gap.

Besides vehicular travel, the gap also provides a crossing through the mountain for hikers on the Appalachian Trail. Appalachian Thru-hikers call this Dante's inferno because it is a very exposed rock scramble. The Delaware and Lehigh Heritage Corridor Trail also intersects Lehigh Gap.

In 2002, the Wildlife Information Center, since renamed the Lehigh Gap Nature Center, purchased more than 750 acres (3.0 km2) near Lehigh Gap. Their goal is to restore the wildlife along Blue Mountain. From 1898 to 1980, the Palmerton Zinc plant emitted sulfur dioxide at rates of up to 3,600 pounds per hour, killing plant life and animal habitats. Twenty years later, a noticeable lack of tree density remains on the Palmerton side of the gap.

The Lehigh Gap Nature Center currently includes The Osprey House on the Slatington side of the river. The nature center works closely with colleges and universities on various wildlife-oriented research projects. The center also sponsors a club for young naturalists. The nature center is home to several miles of hiking trails, open to the public from dawn to dusk.

All content from Kiddle encyclopedia articles (including the article images and facts) can be freely used under Attribution-ShareAlike license, unless stated otherwise. Cite this article:
Lehigh Gap Facts for Kids. Kiddle Encyclopedia.