Lehighton is a borough in Carbon County, Pennsylvania, United States. It is located 77 miles (124 km) north of Philadelphia and 54 miles (87 km) south of Scranton. It is part of the Lehigh Valley metropolitan area, which has a population of 861,899 and is the 69th most populated metropolitan area in the U.S. as of the 2020 census..

Due in part to water power from the Lehigh River, Lehighton was an early center for U.S. industrialization. The Lehigh Valley Railroad was for years a major employer up until the post-World War II era when railroad and industry restructuring led to job and population losses.

From a peak of nearly 7,000 in 1940, the population was 5,500 at the 2010 census. Lehighton is the most populous borough in Carbon County and still the county's business hub.

At the time of the first European's encounters with historic American Indian tribes, this area was part of the shared hunting territory of the Iroquoian Susquehannock and the Algonquian Lenape (also called the Delaware, after their language and territory along the Delaware River) peoples, who were often at odds. Relatives of the peoples of New England and along the St. Lawrence valley of Canada, the Delaware bands occupied much of the coastal mid-Atlantic area in Delaware, New Jersey, Eastern Pennsylvania and lower eastern New York, including Long Island. The Susquehannock confederacy's homelands were mainly along the Susquehanna River, from the Mohawk Valley in lower New York southerly to the Chesapeake and Virginia's Shenandoah Valley, but may have ranged into the 'empty lands' of West Virginia, Eastern Ohio, and Western Pennsylvania. The Dutch and Swedes first settled the Delaware Valley, and found the area north of the Lehigh Gap to be lightly occupied, probably by transients, but traveled regularly by the Susquehannock. This tribe traveled quite a bit according to the American Heritage Book of Indians, including being described in lofty terms by John Smith when a band visited the new Jamestown, Virginia colony. In the decades of the Beaver Wars in the mid-1600s, the Susquehannocks conquered and made the Lenape a tributary tribe — and also nearly inflicted an overwhelming defeat on the powerful Iroquois Confederacy,. Shortly thereafter, the Susquehannocks suffered a reversal, falling first to epidemic disease that raged for three years which killed off potentially 90% of their population, and a series of battles on most of their frontiers as various enemies took advantage. This vacated the southeastern and central Pennsylvania regions for the Delaware peoples. However, all tribes were thereafter displaced westwards by continued colonial growth. Delaware dominance at the time of European colonization is why William Penn's settlers adopted Lenape Lenki (Delaware) names for landscape features, and less than a handful of Susquehannock names.

Lehighton was built on the site of the German Moravian Brethren's mission station "Gnadenhütten" (cabins of grace) founded in 1746. It was established as a mission to the Lenape by Moravians from Bethlehem, Pennsylvania, lower on the Lehigh River. The German name was transcribed as "Canatanheat" by missionary John Brainerd.

During the French and Indian Wars (Seven Years' War), Native allies of the French killed 11 missionaries and Lenape (Delaware) converted Christians at Gnadenhutten on 24 November 1755. They destroyed the mission village, and only four of the fifteen residents escaped. (During the American Revolutionary War in 1782, Pennsylvania militia raided another Moravian mission village, also called Gnadenhutten, in present-day Ohio. Suspecting the Lenape of being allied with the British, the militia killed 96 unarmed people in what became better known as the Gnadenhutten Massacre.)

The Lehigh River was a source of water power for developing industries in the 19th century. Lehighton had silk and lace mills, a meat-packing house, shirt factory, automatic-press works, car shops, stoneworks, and foundries. In 1900, the population was 4,629 people. By 1940, it had reached 6,615.

The Lehighton downtown declined after the Carbon Plaza Mall was built in nearby Mahoning Township. Suburban housing developed, pulling more businesses from downtown. After struggling for three decades, the downtown is experiencing a rebirth as people appreciate the qualities of a compact central location and historic architecture. 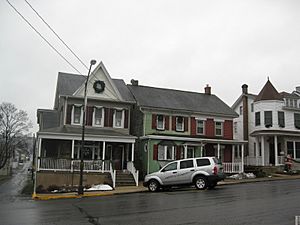 According to the United States Census Bureau, the borough has a total area of 1.65 square miles (4.28 km2), of which 1.62 square miles (4.20 km2) is land and 0.03 square miles (0.07 km2), or 1.69%, is water. Lehighton is located 3 miles (5 km) south of Jim Thorpe, the Carbon County seat, and 7 miles (11 km) northwest of Palmerton. Lehighton is bordered on the north, west, and south by Mahoning Township and across the Lehigh River on the east by Weissport and Franklin Township.

Lehighton is primarily very green and hilly. The town and its outlying communities are in the Ridge-and-Valley region of the Appalachian Mountains. The Appalachian Trail, a long-distance hiking trail extending from Maine to Georgia, is located south of town near Palmerton.

Snowfall is variable, with some winters bringing moderate snow and others bringing numerous significant snowstorms. Average snowfall is 50.4 inches (128 cm) per year, with the months of January and February receiving the highest at just over 15 and 13 inches (38 and 33 cm) respectively. Rainfall is generally spread throughout the year, with eight to twelve wet days per month, at an average annual rate of 43.52 inches (110.54 cm).

Typically, summer lasts from late May until mid September. The humidity is high only for one to two days at a time. Winter lasts from November through March and varies greatly in length and severity. Snowfall can occur anytime from mid-October to as late as April. Spring and autumn are both short and highly variable. The autumn foliage season is only two to three weeks long and is at its peak anytime from early to mid-October.

Carbon County Community Transit provides bus service to Lehighton along Lynx 1, which runs between Nesquehoning and the Lehigh Valley Mall on Tuesdays and Thursdays, and Lynx 2, which runs between Nesquehoning and Walnutport on Mondays, Wednesdays, and Fridays. Fullington Trailways provides daily bus service to destinations in New York and Pennsylvania. Passenger rail service ended in 1961 when the Lehigh Valley Railroad, once a major employer in the area, discontinued all passenger service over its route.

All content from Kiddle encyclopedia articles (including the article images and facts) can be freely used under Attribution-ShareAlike license, unless stated otherwise. Cite this article:
Lehighton, Pennsylvania Facts for Kids. Kiddle Encyclopedia.