Slatington is a borough in Lehigh County, Pennsylvania, United States. As of the 2010 census it had a population of 4,232. It is in the Lehigh Valley region of the state, northwest of Allentown and Bethlehem.

Slatington is home to Victory Park, the location of the community pool and a disc golf course. 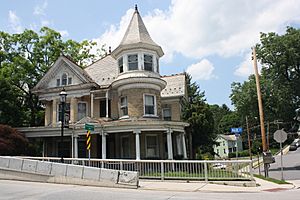 In 1737, Nicholas Kern was the first white settler in what would become Slatington. The Lenni-Lenape Native Americans were already living along "Warriors Path," which would become Route 873. Kern established a sawmill shortly after arriving. In 1756, Benjamin Franklin reported to Governor Morris that he had procured boards and timber from Kern's sawmill. In the 19th century two Welshmen, who recognized its properties and importance from being used in Europe, discovered slate. A quarry was set up in 1845, and, in 1847, a factory was erected. In 1864, Slatington was incorporated into a Borough of Pennsylvania; its first Mayor was Robert McDowell.

Historically, structural iron, knit goods, and silk were manufactured in Slatington, and there were abundant slate quarries in the area.

The Fireman's Drinking Fountain and Slatington Historic District are listed on the National Register of Historic Places.

The borough is served by the Northern Lehigh School District. Northern Lehigh School District has two elementary schools. Peters Elementary school educates students grades Kindergarten through second grade while Slatington Elementary educates grades 3–6. The district has only one middle school (grades 7–8) and one high school (grades 9–12). The district report card from the Pennsylvania Department of Education can be found on the following website: https://web.archive.org/web/20160304073153/http://paayp.emetric.net/Content/reportcards/RC12S121394503000006829.PDF

Main page: List of people from the Lehigh Valley

All content from Kiddle encyclopedia articles (including the article images and facts) can be freely used under Attribution-ShareAlike license, unless stated otherwise. Cite this article:
Slatington, Pennsylvania Facts for Kids. Kiddle Encyclopedia.