The 1808 boundaries of Lausanne Township (Today's Lausanne Township is much smaller than its frontier days), situated as the northwestern corner region of Carbon County pretty much incorporated most of the terrain shown in this view

Historic Lausanne, also often called Lausanne Landing of the 1790s-1820s was a small settlement at the mouth of Nesquehoning Creek on the Lehigh River. It anchored a sawmill, tavern, and in 1804-05, a toll house built for the Lehigh and Susquehanna turnpike, climbing the nearby ravine of Jean's Run as it began the sharp ascent up ‹See Tfd›Broad Mountain to the Hazel, Beaver, Quakake and Black Creek valley into the saddle near the settlement of St John's which would become Hazelton, PA — PA 93 follows much of the same road bed, save for starting at an elevated altitude from the nearby town of Nesquehoning, PA via a high level bridge.

The historic name Lausanne Township (based on the local government as defined by the Pennsylvania Constitution) applied for all the territory north of the Lehigh Gap to the ‹See Tfd›Luzerne County line in the Federalist-era's much larger ‹See Tfd›Northampton County — the whole frontier region above the Lehigh Gap from around 1790 to 1808, and to 1827, when Mauch Chunk was split off. It is removed in time and repeated reorganizations of local government entities from the rump bit of land that is today's Lausanne, Pennsylvania, which is still along the County Line, and but the remains of the old township's size-wise, located along the extreme northern border of Carbon County, Pennsylvania. 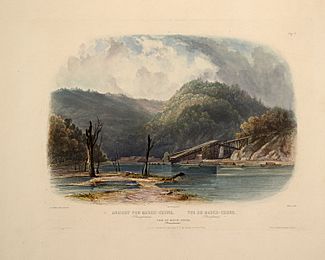 From Karl Bodmer's 1832 'Travels in America' collection of engravings—a view from ‹See Tfd›Bear Mountain at the outlet of the Lehigh Gorge opposite the Nesquehoning Creek and lost town of Lausanne Landing; the first coal chute and coal loading docks at the terminus of the Summit Hill and Mauch Chunk Railroad viewed diagonally across the lakelike slack water pool above the Lehigh's Mauch Chunk Dam from the lightly settled shores of ‹See Tfd›East Mauch Chunk In the foreground, is the long slack water pool above the Lower Lehigh Canal enhanced by the LC&N Co.'s upper lock and first dam at the turn below Mauch Chunk.
Painting is fourteen years after the LCC and LNC were formally incorporated, probably while the Beaver Meadow Railroad was under construction.
This painting shows the view from the (eventual) East Mauch Chunk near the foot of the Lehigh Gorge, across the mile-plus-long 'slack water pool' to the loading docks below Mount Pisgah. Its primitive company town, Mauch Chunk, now Jim Thorpe, Pennsylvania, sits in the shelf-land and gap under Mount Pisgah. By the time of the painting, Landing Tavern and the Lausanne toll house would have been part of Mauch Chunk Township, and Lausanne Township would have continued, but its center would have been displaced northwards to retain other lightly populated wards and precincts outside the new towns.

Today there are only a few stone ruins at the site of the ephemeral community mentioned by nineteenth century historians as 'Lausanne', 'Lausanne Landing', and 'Lausanne Township', each signifying a frontier settlement which was a community occupied for most of three decades by a few permanent pioneers, but mainly by transient work crews, either building ‹See Tfd›one way cargo boats, cutting down trees, or mining coal.

Tucked between Weatherly and Jim Thorpe lies the lost town of Lausanne Landing.

Some may know of Lausanne Township, which was created in 1808 when Penn Township was divided into East Penn, West Penn and Lausanne.

The township became smaller and smaller as portions of it were set off for Mauch Chunk in 1827, Banks in 1842, Packer in 1847 and Weatherly in 1863. The largest portion was relinquished to Lehigh Township in 1875.

Now ‹See Tfd›the township is 6 miles in length and 2½ miles in breadth.

The Lehigh & Susquehanna Turnpike's buildings were erected alongside 'Landing Tavern' which had been erected along the Amerindian trail head of the mostly unimproved foot path between Lausanne and Nescopeck, before it ascended Broad Mountain and before it was acquired by investors and chartered (1804) as a toll road. These buildings and others such as storehouses, a saw mill and the turnpike toll house were all located near the 'Delta' of the Nesquehoning, the wide shallow slopes in the flood prone mouth terrain at the confluence of the Lehigh coming westwards out of the Lehigh Gorge and the east flowing Nesquehoning Creek flowing down its steep sided deep ravine into the head end of the calm slack water lake running southwards at right angles to both from their merge.

Pioneering penetrations of mountainous terrain were spearheaded by traders and subsistence hunters gradually exploring the frontier with or without an Amerindian guide. Either of which were often followed by lumbermen harvesting the riches of the forest, the structural material which Lewis Mumford in his seminal study of the interrelationships between technology and societal development, "Technics and Civilization" noted:

The rational conquest of the environment by means of machines is fundamentally the work of the woodsman. In part, the explanation of his [mans] success is can be discovered in terms of the material he uses. For wood, beyond any other natural material, lends itself to manipulation: right down to the nineteenth century it had a place in civilization that the metals themselves were to assume only after that point.

Because of the valley's collision between warring ridgelines above the Lehigh's water gap where ‹See Tfd›Broad Mountain, Nesquehoning Mountain, Pisgah Ridge, and Mauch Chunk Ridge all funnel waters into the long slack water pool where the Lehigh is slow and broad and lakelike under the shadow of the west face of ‹See Tfd›Bear Mountain

All content from Kiddle encyclopedia articles (including the article images and facts) can be freely used under Attribution-ShareAlike license, unless stated otherwise. Cite this article:
Lausanne Landing, Pennsylvania Facts for Kids. Kiddle Encyclopedia.