Stockertown is a borough in Northampton County, Pennsylvania, United States. It is located in the Lehigh Valley metropolitan area.

The borough contains large industries such as Hercules Cement, Polymer Products, and Praxair. The borough spans a 21⁄2-mile radius and provides services for a population of 927 residents. Stockertown is at the hub of five surrounding second-class townships, and until the Charles Chrin Interchange was built near Tatamy in 2015, provided the closest access to Pennsylvania Route 33 for many industrial parks in these townships. 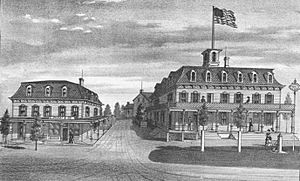 An 1877 lithograph print of the Sandt & Co. Building and the Centennial Hotel. 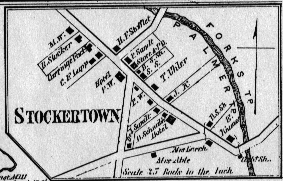 An inset from an 1874 atlas of Northampton County, showing Stockertown.

The Borough of Stockertown was named for the Stockers, a Swiss family who settled on the land in the late 18th century. The post village was referred to as Stockersville as of 1845, and described as a very fertile area. In late 1900, by which time the village was being called Stockertown, a group of the village's citizens petitioned Northampton County Court to grant the community the status of a borough. That petition was granted and, early in 1901, the Borough government was organized.

In 1906, a cement plant (which later became Hercules Cement) was constructed as The Nazareth Works of Atlantic Portland Cement Company. It acquired the name of Hercules Cement Company in 1916 after its holdings after Atlantic Portland Cement filed for bankruptcy. It has changed owners many times through mergers, and as of 2008 is owned by Buzzi Unicem.

The freeway now known as Route 33, which runs through Stockertown, began construction in 1959 from Wind Gap to Saylorsburg. Meetings were first held with residents of Stockertown in the mid 1960s, and the Stockertown portion of the highway was constructed in 1971, opening in 1972.

There were 279 households, out of which 28.3% had children under the age of 18 living with them, 58.1% were married couples living together, 8.2% had a female householder with no husband present, and 30.1% were non-families. 27.2% of all households were made up of individuals, and 12.2% had someone living alone who was 65 years of age or older. The average household size was 2.46 and the average family size was 2.95.

Belts of limestone lie under a part of the borough that borders Palmer Township and the nearby borough of Tatamy. This along with Hercules Cement's nearby quarrying makes these areas prone to sinkholes (see Karst Topography), and led to the closure of a bridge that carried a state road (Bushkill Street) over the Bushkill Creek. This bridge remains closed as of 2013.

The Borough is served by the Nazareth Area School District. 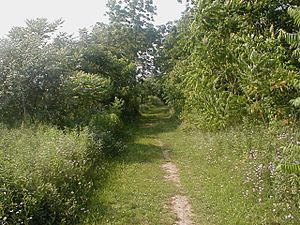 A view of the formerly-undeveloped Stockertown Rail Trail. Its intersection with Dogwood Lane is just out of view.

Stockertown is home to a packed cinder rail trail, which, once fully developed, is slated to link the Plainfield Township Trail and the Palmer Bikeway. The existing trail is about a mile long, starting at Sherman Metzgar Park, and extending to a parking area along Main Street at the North edge of the borough (Belfast Junction).

A missing link of the trail, which is still in the planning stages, would be a major step towards a regional trail system by connecting Stockertown and Tatamy. Another proposed trail would extend from the Northern hub of the Stockertown Rail Trail to Jacobsburg State Park, adding connections to Bushkill Township.

All content from Kiddle encyclopedia articles (including the article images and facts) can be freely used under Attribution-ShareAlike license, unless stated otherwise. Cite this article:
Stockertown, Pennsylvania Facts for Kids. Kiddle Encyclopedia.