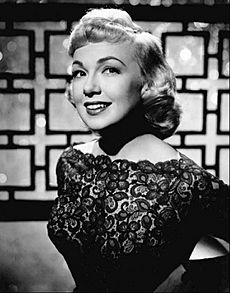 Edith Elizabeth Enke, also known as Edie Adams (April 16, 1927 – October 15, 2008), was an American business woman, singer, actress and comedienne. She won several Tony and Emmy Awards for her acting. She played Eileen Sherwood in the Broadway play Wonderful Town. She also played Miss Olsen in the movie The Apartment.

Adams was born in Kingston, Pennsylvania. She was married to Ernie Kovacs from 1954 until his death in 1962. She died from pneumonia and cancer at age 81 in Los Angeles.

All content from Kiddle encyclopedia articles (including the article images and facts) can be freely used under Attribution-ShareAlike license, unless stated otherwise. Cite this article:
Edie Adams Facts for Kids. Kiddle Encyclopedia.