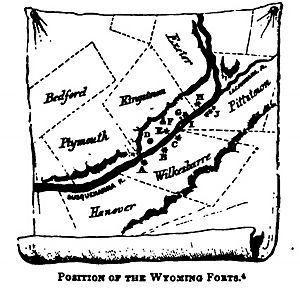 Forty Fort was a stronghold built by settlers from Westmoreland County, Connecticut, on the Susquehanna River in Luzerne County, Pennsylvania. During the American Revolutionary War, both Connecticut and Pennsylvania claimed this territory, as Connecticut laid claim to a wide swath of land to its west based on its colonial charter. These competing claims were settled by exchanges and agreements with resolution by the national government after the United States gained independence.

This fort became a refuge for displaced settlers during the Battle of Wyoming in 1778. Zebulon Butler's force of Continental and allied Indians was defeated by the far larger force of Loyalists and their Indian allies.

All content from Kiddle encyclopedia articles (including the article images and facts) can be freely used under Attribution-ShareAlike license, unless stated otherwise. Cite this article:
Forty Fort Facts for Kids. Kiddle Encyclopedia.