Forty Fort is a borough in Luzerne County, Pennsylvania, United States. The population was 4,214 at the 2010 census. Its neighbors are Wyoming (to the north), Plains Township (to the east), Kingston (to the south), and Swoyersville (to the west). The Wilkes-Barre Wyoming Valley Airport and the Wyoming Seminary Lower School are both located in the borough. 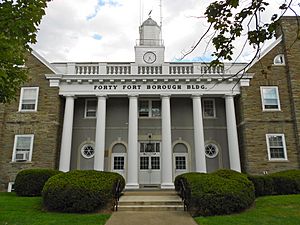 Forty Fort was named for a Revolutionary War-era fort that the town's original settlers built; there were forty of these settlers from Connecticut, so the town was later named Forty Fort. Forty Fort was prominent in the Pennamite–Yankee War and in the American Revolution. A large stone was placed at the end of Fort St. in 1900 by the Daughters of the American Revolution to mark the approximate location of the fort. In the vicinity of this fort occurred, in 1778, the Battle of Wyoming. 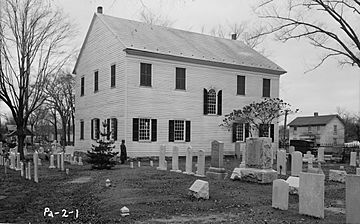 Forty Fort is home to perhaps the oldest building known in northeastern Pennsylvania, the Forty Fort Meetinghouse, located in the borough's cemetery. The meeting house was built in 1806–08. In late October 2005, Forty Fort's Wyoming Seminary Lower School launched a successful attempt to save the building from damage and preserve it as a recollection of past historic memories of Forty Fort. Forty Fort also hosts the historic Nathan Denison house. Denison served as colonel of the militia for the area during the Revolution.

In 1972, Hurricane Agnes delivered inches of rain into the Wyoming Valley, causing the Susquehanna River to overflow its banks. In Forty Fort, a portion of the dike protecting the valley from Susquehanna River broke, causing millions of dollars in damage to Forty Fort and surrounding towns. In addition to structural damage, the Forty Fort Cemetery was heavily affected when over 2,000 caskets were washed away. Recovered bodies were eventually buried in a mass grave with a monument marking the 1972 flood's damage.

Forty Fort has a strong council/weak mayor form of government. Borough Council has seven council members. Elections are split every two years where almost half the council is up for election. It runs with the mayor and three council seats are up for election, then two years later the other four council seats are up for election. Council acts as the legislative branch. The Council is the more powerful branch of the strong council/mayor form of government that Forty Fort employs. The last Borough Council election was in 2015 and the next is 2017. 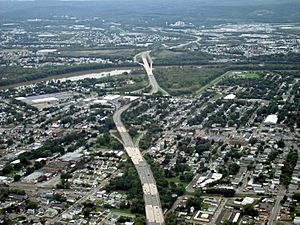 U.S. Route 11 (Wyoming Avenue) runs from Wyoming, through Forty Fort, and into Kingston. PA 309 runs through the southern end of Forty Fort. The borough is also home to the southern edge of the Wilkes-Barre Wyoming Valley Airport, a public facility serving mainly general aviation aircraft. The rest of the airport is in Wyoming.

Forty Fort is part of the Wyoming Valley West School District. There are three schools located in Forty Fort:

All content from Kiddle encyclopedia articles (including the article images and facts) can be freely used under Attribution-ShareAlike license, unless stated otherwise. Cite this article:
Forty Fort, Pennsylvania Facts for Kids. Kiddle Encyclopedia.