Briar Creek is a tributary of the Susquehanna River in Columbia County, Pennsylvania, in the United States. It is 7.77 miles (12.50 km) in length. The stream has a watershed area of 33.0 square miles. It flows through Briar Creek Township and the borough of Briar Creek. The area near the creek was originally inhabited by the Lenni Lenape and the Shawanese. European settlers arrived in the 1770s.

There are Pennsylvania State Game Lands in the watershed, as well as a lake known as the Briar Creek Reservoir. In the lake, the most common species of fish is yellow perch.

Briar Creek begins where Knob Mountain, Huntington Mountain, and Lee Mountain meet in western Briar Creek Township. It flows east for a short distance before turning south through a gap in Lee Mountain, briefly descending quite steeply. The course levels out as it leaves the mountain behind and begins flowing through a valley after a short distance. It flows under Pennsylvania Route 93, leaving the valley behind. Soon afterwards, the stream picks up the tributary West Branch Briar Creek and turns southeast. After some distance, it enters the community of Briar Creek and picks up the tributary East Branch Briar Creek. The stream then turns southwest and reaches its confluence with the Susquehanna River near French Island. 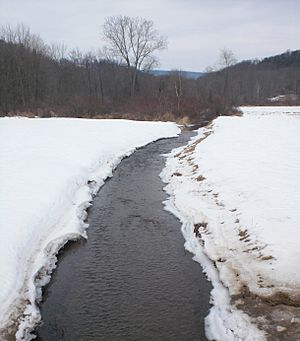 The watershed of Briar Creek is located in the ridge and valley physiographic region. The top of Lee Mountain forms a drainage divide between the creek's watershed and another watershed. Several points along Briar Creek and its tributaries have erode with ease or moderate ease. The infiltration capacity of these points is mostly moderate to high. 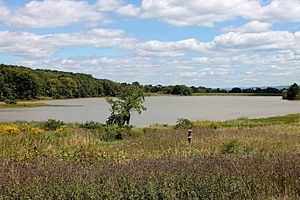 There are approximately 44.23 miles (71.18 km) of streams in the Briar Creek watershed. The watershed is made up of seven smaller watersheds, or sub-watersheds. A 53-acre lake known as the Briar Creek Reservoir is also situated on a tributary to Briar Creek. The lake, which is manmade, was constructed for flood control purposes in the early 1970s. It is also used for fishing and boating.

Briar Creek was historically known as the "Kawanishoning" to the area's Native Americans. This name was a Lenni Lenape word for "sweet briar". However, the creek was also referred to as "Kawanishoning Creek" by white soldiers and explorers during the time of the American Revolutionary War. By 1770, some maps began referring to the creek as Bryar Creek, which became the more common name by the end of the eighteenth century and remained so as late as 1840. However, the spelling gradually changed to Brier Creek and then Briar Creek.

Up to approximately 1770, the area around Briar Creek was inhabited by the Lenni Lenape Indians. They built villages on the banks of the creek. The Shawanese also had a village at the mouth of the creek. In the 1770s, European settlers arrived in the area. The White family from New Jersey was among the first families of settlers to arrive in the Briar Creek valley. The Briar Creek area was one of the first places in Columbia County to be settled, on account of the high level of fertility of the land. The area around Briar Creek was part of Northumberland County in the late 1700s. In 1799, Samuel Ely was granted a patent from the state of Pennsylvania for 307 acres of land on Briar Creek known as "Manheim". In 1806, he gained a 426-acre tract of land on the creek. This tract was known as "Quincy". Ely's four sons inherited the land.

In the beginning of the 1800s, a number of mills were built on tributaries of the creek. A number of other industries were established in the watershed in the early 1800s, including a sawmill, a woolen mill, an iron furnace, and a tannery. In the second half of the 1800s, railroads began to be built in the watershed. Heavy industries and fisheries also began to appear in the area around this time.

More than 90 species of birds breed within the Briar Creek watershed. These include several species of ducks, flycatchers, herons, plovers, rails, and swallows, as well as one species of kingfisher and one species of crane. Bald eagles, sandhill cranes, and several species of waterfowl have been observed on Briar Creek Reservoir. Mammals living in the watershed include minks, muskrats, and short-tailed shrews, and the endangered Indiana bat. Fish, damselflies, mayflies, and other macroinvertebrates also inhabit the watershed. A total of 28 species of fish were observed by the Pennsylvania Fish and Boat Commission in the watershed in 2006. Earlier, 34 species were observed.

In April 2010, the Pennsylvania Fish and Boat Commission performed a survey of the fish species residing in Briar Creek Reservoir. The most common fish observed were yellow perch (645 specimens), brown bullhead (322 specimens), golden shiner (319 specimens), white crappie (216 specimens), hatchery trout (153 specimens), and bluegill (121 specimens). The largest fish observed were common carp, of which two specimens between 23 inches (58 cm) and 25 inches (64 cm) were observed. The smallest fish were pumpkinseed, of which 12 specimens between two and four inches (five and ten centimeters) were observed. Minnows also live in West Branch Briar Creek. 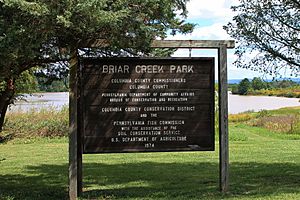 Briar Creek Reservoir is located in the Briar Creek watershed, on East Branch Briar Creek. It is owned by the Pennsylvania Fish and Boat Commission and Columbia County. It was originally constructed to control floods, but most recreational activities in the watershed take place at this lake. These include fishing, picnicking, and weddings. There are also Pennsylvania State Game Lands in the watershed. The waters of Briar Creek are approved trout waters and the stream is stocked with trout.

All content from Kiddle encyclopedia articles (including the article images and facts) can be freely used under Attribution-ShareAlike license, unless stated otherwise. Cite this article:
Briar Creek (Susquehanna River tributary) Facts for Kids. Kiddle Encyclopedia.