Freeland is a borough in Luzerne County, Pennsylvania, United States. It was originally called Birbeckville, South Heberton, and Freehold. Freeland is 18 miles (29 km) south of Wilkes-Barre and 10 miles (16 km) northeast of Hazleton. It was incorporated as a borough on September 11, 1876. Coal mining was the chief industry in the community up until the mid-20th century. As of the 2020 census, the population was 3,833.

Joseph Birkbeck, the founder of Birbeckville (not an actual name for the town of Freeland), was born near Brough under Stainmore, in the county of Westmorland, England, on May 2, 1802. He and his wife Elizabeth came to America in 1844. After acquiring land from Edward Lynch the same year of his arrival, Birkbeck built a log cabin in the region that is the small valley between Freeland and Upper Lehigh. The next settler, Nathan Howey, purchased land from Birkbeck and built a frame house just west of Birkbeck's log cabin.

Developing coal mines in the nearby region created a steep increase in population and a demand for building lots. This led Birkbeck to survey the region for the town of South Heberton. South Heberton has long since lost its identity and is now simply a cluster of houses along Schwabe Street which is now part of Freeland. Birkbeck's sawmill is at the turn of the road just east of Upper Lehigh, and what was mainly South Heberton is now known as Schwabe Street in Freeland which sits south of Upper Lehigh, a small mining town once owned by the Upper Lehigh company. 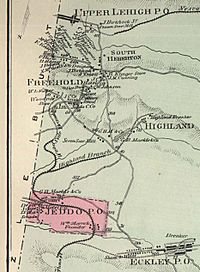 Between 1845 and 1846, Birkbeck cut the road now known as Buck Mountain Road through the woods from South Heberton through Eckley Miners' Village to Buck Mountain. Eckley was then known as Shingletown, as the chief industry there was the production of shingles.

The first child born at South Heberton was Elizabeth Birkbeck, the daughter of founder Joseph Birkbeck and his wife Elizabeth, in 1845. The first death at this place was that of William, the son of Joseph and Elizabeth Birkbeck, which occurred February 11, 1846. He was four years old at the time. The first store at South Heberton was kept by a man named Feist, which was just west of Birkbeck's cabin. Soon afterward another small store was run by a Mr. Mining. The first tavern was founded by N. Howey, the second settler of the region. Previous to the opening of Howey's tavern, Birkbeck accommodated parties who were prospecting in this region for anthracite deposits in his own home. A frame school was built in 1878, and by 1880 the population numbered 500.

Freeland was incorporated as a borough in 1876.

In 1883, the first Slovak Lutheran Church in America was organized in Freeland.

The population steadily grew due to the coal mining popularity and European immigration up until the mid-20th century. During the last few decades, Freeland's population has been declining while the median age has been rising and is now 42 years, four years higher than Pennsylvania's median age. This is mainly due to the decline of the coal industry, which was the sole appeal to new immigrants in the early 20th century.

For a detailed look at Freeland's history, visit the History of Freeland website: http://www.andrew.cmu.edu/user/ct0u/freeland.html

As of 2017, Freeland has a YMCA Program, a community park, The Hazleton Area Public Library Freeland Branch and a remodeled Little League field. Also, there is a football/baseball field named "Della Croce Field" after Gene Della Croce, former Director of the Freeland YMCA. Along with the several parks and fields, several restaurants still remain in Freeland including The Other Side, Sorrento's Pizza, The Garlic Knot, and Garden Chen Chinese Food. A CVS Pharmacy is also located in the central part of Freeland.

Since a large demographic of people in Freeland are of Irish descent, every year, there is a St. Patrick's Day parade through downtown followed by a dinner. There are also annual events for Memorial Day and Veterans Day, due to the large amount of retired and active duty soldiers living in the surrounding areas. (Especially with the VFW and American Legion buildings being nearby). As part of the Memorial Day celebration, an annual Pub Run takes place, in which participants run a course with bars along the way. Participants must stop and finish a drink at each bar before continuing the race. The race usually consists of 9 bars throughout the borough, as well as some that do not technically fall within the municipal entity.

According to the United States Census Bureau, the borough has a total area of 0.66 square miles (1.7 km2), all of it land.

All content from Kiddle encyclopedia articles (including the article images and facts) can be freely used under Attribution-ShareAlike license, unless stated otherwise. Cite this article:
Freeland, Pennsylvania Facts for Kids. Kiddle Encyclopedia.