Mountain Top is an unincorporated area and census-designated place (CDP) in Luzerne County, Pennsylvania, United States. As of the 2010 census, the CDP population was 10,982. 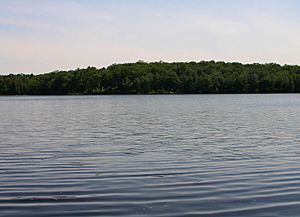 Mountain Top is located in the saddle pass atop the drainage divide between the Susquehanna River basin to the north and west and the Lehigh River basin to the east and south, so sits astride an important land communications corridor bridging the two watersheds below. It is just 8 miles (13 km) northwest of White Haven at the head end of the Lehigh River gorge and in the heights above Hazleton, Pennsylvania only 10 miles (16 km) south of Wilkes-Barre on Pennsylvania Route 309. Consequently, even though regional railroads are much diminished in scope and influence, Mountain Top yard, once used as a marshaling yard at the top of the Ashley Planes funicular (cable driven) railway, is still an important regional element of the transportation infrastructure connecting Allentown and Philadelphia with points north and west via trackage to several yards in New York State.

There were 5,556 households, out of which 36.8% had children under the age of 18 living with them, 68.2% were married couples living together, 8.1% had a female householder with no husband present, and 20.9% were non-families. 18.4% of all households were made up of individuals, and 8.5% had someone living alone who was 65 years of age or older. The average household size was 2.72 and the average family size was 3.10.

All content from Kiddle encyclopedia articles (including the article images and facts) can be freely used under Attribution-ShareAlike license, unless stated otherwise. Cite this article:
Mountain Top, Pennsylvania Facts for Kids. Kiddle Encyclopedia.