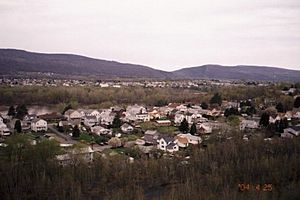 On January 22, 1959, a cave-in occurred at the Knox Coal Mine in Greater Pittston's Port Griffith. Twelve people died, 69 others escaped. One miner, Amadeo Pancotti, was awarded the Carnegie Medal for leading 32 miners to safety. The bodies of the twelve who died were never recovered, despite efforts of divers and an attempt to pump the water out of the mining shafts. The Knox Mine Disaster essentially shut down the mining industry in Northeastern Pennsylvania.

All content from Kiddle encyclopedia articles (including the article images and facts) can be freely used under Attribution-ShareAlike license, unless stated otherwise. Cite this article:
Port Griffith, Pennsylvania Facts for Kids. Kiddle Encyclopedia.