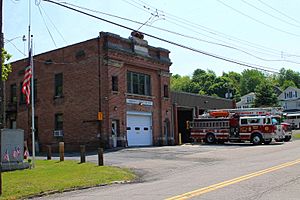 Wanamie is an unincorporated community and census-designated place in Newport Township, Luzerne County, Pennsylvania. It is located in the southwest end of the Wyoming Valley and uses the Nanticoke zip code of 18634. The South Branch Newport Creek forms the natural eastern boundary of Wanamie and drains it northeast via the Newport Creek into the Susquehanna River. The village is named after the Wanami tribe of the Lenni Lenape. As of the 2010 census, its population was 612.

All content from Kiddle encyclopedia articles (including the article images and facts) can be freely used under Attribution-ShareAlike license, unless stated otherwise. Cite this article:
Wanamie, Pennsylvania Facts for Kids. Kiddle Encyclopedia.