Duryea is a borough in the Greater Pittston area of Luzerne County, Pennsylvania, United States, 9 miles (14 km) south of Scranton. The Susquehanna River marks Duryea's western boundary, and the Lackawanna River flows through Duryea. It was incorporated as a borough in 1901, and had a notable switching rail yard, the Duryea yard (or Muller yard), connecting the central Wyoming Valley to destinations in lower New York and down-state Pennsylvania (in Harrisburg and Philadelphia). Coal mining and silk manufacturing were the chief industries in Duryea's early years. The population was 4,917 at the 2010 census.

The area was historically the heartland of the Susquehannock tribe or Amerindian nation, also called the Conestoga which were an Iroquoian people whose territory extended from lower New York State down the river to the Potomac somewhat beyond the mouth of the Susquehannock. The Susquehannock befriended the far ranging Dutch traders by 1612 who soon began trading tools and firearms for furs. The Dutch had established their trading posts along the Rivers near where two natural Indian trails allowed them to make contact with the Conestoga— these were the sometimes disputed, mostly shared hunting lands of the Susquehannocks and the rival Delaware nation (Lenape peopke).

The Dutch while buying the lands for their settlements on the Hudson and Delaware in Lenape lands, soon developed frictions with their hosts and eventually favored and formed an alliance with the more warlike and fierce Susquehannocks. In the 1630s the Susquehannocks and Lenape warred and in a significant defeat, the later tribe, or its southern group became tributary to the victors. In 1642 the British Province of Maryland declared war on the Susquehannocks and over eight mostly inconsequential years of warfare, while the Dutch allied themselves with the Susquehannocks, lost it to the Dutch and the Indians. A few years later, the English Sea Power defeated the Dutch ending their continued influence in North America. The Conestoga continued to grow in strength. In the 1660s the area supported an extend military conquest which greatly weakened two of the western Iroquois tribes (The Susquehanna valley extends northwest from Duryea to Sayre, Pennsylvania and central Pennsylvania and New York states): the Seneca and Catagua, but were struck by three years of plague in about 1670 in which 9 of 10 Susquehannocks' died. In the next few years, renewed war with the Iroquois kept the tribe from recovering and only a pale remnant of its strength relocated to the plains area now between Harrisburg and Philadelphia, where they came to deal with William Penn and the new colonial Province of Pennsylvania.

Forty original settlers arrived from Connecticut on February 8, 1769, and set up temporary cabins near the confluence of the Lackawanna and Susquehanna rivers, the area now at the southeast end of Duryea borough. One of the first settlers was Zebulon Marcy, from whom Marcy Township, got its name. He built the first log cabin in 1770 on the west side of the present Main Street of Duryea not far from the Old Forge line. As more settlers located in the area, the development of mining caused the citizenry to petition for township status. Marcy Township was founded in 1880 with a population of 1,159. A census of the township in 1894 noted a population of 2,396 and 475 dwellings in a 400-acre (160 ha) settlement. By the 1890s the area was being called Duryea.

Duryea grew in population and listed 1,306 taxables and 1,005 registered voters in 1901 when it petitioned for reorganization as a Pennsylvania borough. The borough was incorporated on May 28, 1901 and renamed as Duryea Borough; the change in legal status was taken advantage of and renamed in honor of Hiram Duryea, an American Civil War general and owner of extensive tracts of land in sections of the country. He was a prominent figure in the starch industry, a coal operator and an official of the Delaware, Lackawanna and Western Railroad. It was the practice of this railroad to name its section stops after officials of the line, hence the name of Duryea. In one sense, like many neighborhoods and place names in the country, the town is named after its railroad station name.

Farming was the principal occupation in the earliest days. Pioneer settlers found many portions of the land suitable for raising food that they needed for existence. Shortly after, mining would become the area's greatest source of prosperity, along with silk mills and stone quarries.

In September 2011, Hurricane Irene and Tropical Storm Lee caused flooding. It destroyed many homes along the Lackawanna River in Duryea, stretching from Phoenix Street to Elm Street. Elevated train tracks near the Weis Markets and other stores and the dyke along the Lackawanna, along with a small hill leading to Phoenix Street and another hill along Main Street and beyond Elm, created a basin, inside of which most houses were flooded. A small number of houses across from the cemetery received little to no water, while most buildings along Main outside Elm were not flooded. Some houses that took no water that were just outside Elm were flooded with sewage, as the drains backed up and burst up into these houses. Main Street buildings had less damage than those buildings right next to the levee and those on Chittenden, where the water reached the second floor. The lowest point along Main Street inside the Basin only took 6 feet (1.8 m) of water on the first floor.

Many of the residents of Duryea who lived in this basin have left, while others are trying to fix their buildings. As of March 8, 2012, about five of these buildings are finished, and only four are inhabited.

Mining and industry—first half of 20th century 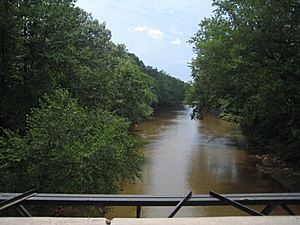 Lackawanna River from Coxton Road bridge looking toward the Confluence and the Duryea Rail yard and bridges across the stream.

Like many of the surrounding towns (Pittston, Hughestown, Old Forge), Duryea lost population when the need for deep-mined coal diminished. Three large colliers once operated there, processing the coal for transport. As in the other nearby towns, the coal was often mined directly under the town itself. Remnants of strip mines and culm banks that were never properly cleaned up and redeveloped litter the landscape.

On the west side of the Lackawanna River, sand and gravel quarry operations continue to spoil what was once a beautiful landscape and riverway. The Lackawanna River is heavily polluted with the outflow from abandoned mine tunnels and choked with orange sediment.

Population has been declining for years, with increased geriatrification.

Last half of 20th century

Duryea was once fiercely independent. Primarily populated by Polish immigrants and their descendants, the town benefited from the coal industry and silk mills and was a self-contained community with its own Main Street and School District. Once the fifties saw the switch to diesel locomotives and passenger rail operations continued to contract with the still increasing shift to motor cars, the three colliers once busy delivering anthracite gradually laid off workers and closed their doors. By the mid-sixties, rail activity was undergoing its contraction and even railroad jobs dropped away as the era of railroad consolidation took place and eventually CONRAIL emerged for its brief era.

After the death of coal and the loss of the silk mill, the town encouraged the likes of Schott Optical and Topps Bubble Gum to establish medium-sized plants in the town. However, these would never replace the jobs and revenue provided by coal. Declining population resulted from that problem and eventually with declining enrollment, resulted in the takeover of the town's schools by the Pittston Area School District. The remaining neighborhood schools were eventually phased out and shut down with Duryea Elementary being shut down in 1981. Children were bused 10–15 minutes away to the new regional elementary and middle schools in the abutting town of Pittston.

Industry in the 21st century

Investment by Reading Blue Mountain and Northern railroad spurred by Marcellus Shale company's natural gas exploration in the areas surrounding Duryea has transformed an antiquated, weed-ridden rail yard in Duryea, known as the Duryea Yard (and miscalled the 'Pittston yard' since only the yard approach wye is in Pittston), into a transloading terminal teeming with rail and trucking activity. The yard transloads sand from rail cars to trucks for use in Marcellus Shale gas drilling operations.

The Reading & Northern Railroad Co. invested in Pittston Yard in late 2009 and early 2010, laying track to accommodate 100 new rail cars and constructing a facility to store and hold up to 800 cars of sand to be used in hydraulic fracturing, or “fracking,” operations at Marcellus Shale drill sites throughout northeastern Pennsylvania. There is a sand quarry operating just north of the borough limits along a line once traversed by rails leaving the yard in its better days.

All content from Kiddle encyclopedia articles (including the article images and facts) can be freely used under Attribution-ShareAlike license, unless stated otherwise. Cite this article:
Duryea, Pennsylvania Facts for Kids. Kiddle Encyclopedia.