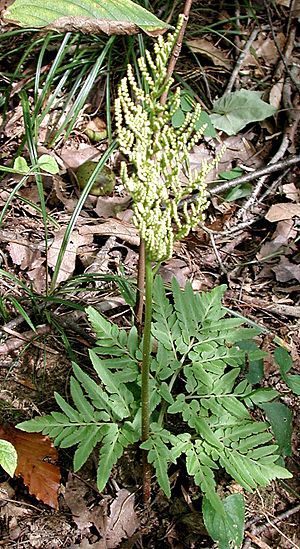 Sceptridium dissectum is a common fern (or fern-ally) in the family Ophioglossaceae, occurring in eastern North America. Like other plants in this group, it normally only sends up one frond per year. It has long been the subject of confusion because the frond presents in one of two forms, either the normal form (forma obliquum) that resembles other plants in the genus, or the skeletonized form (forma dissectum).

This is the most common grape fern throughout most of its range. It is a frequent denizen of disturbed lands, often growing with Diphasiastrum digitatum and Asplenium platyneuron. It has an unusual growing season, with the new frond emerging in July and dying back in May. The frond often turns from green to a bronze color during the winter.

Like other grape ferns, it depends on a mycorrhizal association in the soil.

At first glance most think there are two separate fronds. The fertile stalk is joined to the stalk of sterile leaf blade near the rhizome. The sporangia resemble grapes which is why these types of ferns are known as grape ferns.  The leaves on a sterile frond have lacy edges. Sceptridium dissectum stands six to fifteen inches tall. Sceptridium dissectum can stay a greenish bronze color through winter.

Sceptridium dissectum can be miss identified as Botrypus virginianus (L.) Sw. commonly known rattlesnake fern.  Botrypus virginianus sporangia looks like the tail of a rattlesnake like a rattle. Sceptridium dissectum is also a close relative to the Southern Grapefern or Botrychium biternatum. These ferns are part of the Ophioglossales order and Ophioglossaceae, known as the Adder’s tongue family. There are three ways to help distinguish the cut-leaf grape fern and the rattlesnake fern. The first is by size, the rattle snake fern can be found up to two feet tall compared to the cut-leaf fern that can be found up to a foot tall. Second the petiole or stalk for a cut-leaf fern is light green while the rattlesnake fern’s petiole is pink at the base.

The spores have to be in darkness for 3-4 weeks before any spore germination can occurs. The longer the spores remain in darkness the greater percentage of germination may occur Spore germination and early gametophyte growth were also directly effected by oxidation level of the supplied nitrogen source. The fern remains dependent on the fungi even after sterile and fertile leaves emerge. Unlike some members of the Ophioglossacae, Sceptridum dissectum does not always develop spores. Sceptridum dissectum only creates one leaf per year. The cutleaf grapefern is rumored to live for about 10 to 45 years. Because the cutleaf grapefern is so hard to cultivate it is rarely used horticulturally. The plant is generally common except in New York where it is listed as endangered.

Wild turkey and ruffed grouse feed on the leaves as well as the white-tailed deer.

All content from Kiddle encyclopedia articles (including the article images and facts) can be freely used under Attribution-ShareAlike license, unless stated otherwise. Cite this article:
Sceptridium dissectum Facts for Kids. Kiddle Encyclopedia.