It is a low growing species, typically being a foot high or smaller. The leaf emerges in the early spring and will senesce in late summer. The leaf is roughly triangularly shaped and 15–50 cm in size and held roughly parallel to the ground. The leaf is 3-4 times pinnately compound, brightly green colored, and feels soft to the touch. The stem is round and bicolor, being pinkish or light tan at the base but greenish nearer the branches or leaves. The diploid number is 184.

Rattlesnake fern has separate fertile and sterile leaves, when present the sterile leaf arises halfway up the stalk and the fertile leaf exists at the tip. The spores are shed in late spring. Like other ferns rattlesnake fern undergoes alternation of generations and the form described in this article is the sporophyte.

This fern has been used medicinally. In India it is still used to treat dysentery. 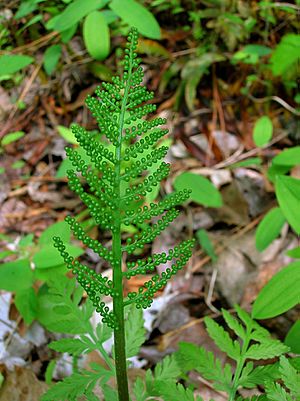 Recent research has determined that the mitochondria are genetic chimera. DNA from some member of the Santalales, possibly a species of mistletoe, has transferred to the mitochondrial genome of this species of fern. It is believed that this transfer may have helped to enable this plant's cosmopolitan global distribution.

This plant has long been included in the genus Botrychium, but was unique within the genus because of chromosome number and other signatures, including the inclusion of presumed mistletoe DNA within its mitochondria. Recent research has established that this plant is sister to all other Botrychioid plants, including both the genus Botrychium sensu stricto, and the genus Sceptridium, with the exception of a single known species, previously included in Botrypus, which is B. strictus. That plant was shown to be sister to all other Botrychioids, including B. virginianus, so must be segregated in its own genus.

This is a wide-ranging species. It abounds in many parts of the United States, in the mountains of Mexico, in Australia, in some parts of Asia, as the Himalaya Mountains, and is found also in Norway, in the Karelia region of Finland and Russia, and around Gulf of Bothnia, although in no other part of Europe. It is large and succulent and is boiled and eaten in the Himalayas.

All content from Kiddle encyclopedia articles (including the article images and facts) can be freely used under Attribution-ShareAlike license, unless stated otherwise. Cite this article:
Botrypus Facts for Kids. Kiddle Encyclopedia.