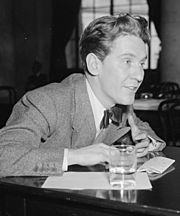 Oliver Burgess Meredith (November 16, 1907 – September 9, 1997), or Burgess Meredith, was an American movie, television, stage, radio, voice actor, and director. He was known for his roles as The Penguin in the 1960s television version of Batman and as Mickey Goldmill some of the Rocky movies. He won two Saturn Awards (in 1978 and in 1981), Tony Awards, and many Emmy Awards.

All content from Kiddle encyclopedia articles (including the article images and facts) can be freely used under Attribution-ShareAlike license, unless stated otherwise. Cite this article:
Burgess Meredith Facts for Kids. Kiddle Encyclopedia.