The Chieftains facts for kids

The Chieftains are a traditional Irish band formed in Dublin in 1962, by Paddy Moloney, Sean Potts and Michael Tubridy. Their sound, which is almost entirely instrumental and largely built around uilleann pipes, has become synonymous with traditional Irish music and they are regarded as having helped popularise Irish music across the world. They have won six Grammys during their career and they were given a Lifetime Achievement Award at the prestigious BBC Radio 2 Folk Awards in 2002. Some music experts have credited The Chieftains with bringing traditional Irish music to a worldwide audience, so much so that the Irish government awarded them the honorary title of 'Ireland's Musical Ambassadors' in 1989.

The band's name came from the book Death of a Chieftain by Irish author John Montague. Assisted early on by Garech Browne, they signed with his company Claddagh Records. They needed financial success abroad, and succeeded in this, as within a few years their third album's sleeve note section was printed in three languages.

Paddy Moloney came out of Ceoltóirí Chualann, a group of musicians who specialised in instrumentals, and sought to form a new band. They had their first rehearsals at Moloney's house, with David Fallon and Martin Fay joining the original three. The group remained only semi-professional up until the 1970s and by then had achieved great success in Ireland and the United Kingdom.

In 1973, their popularity began to spread to the United States when their previous albums were released there by Island Records. They received further acclaim when they worked on the Academy Award–winning soundtrack to Stanley Kubrick's 1975 film Barry Lyndon, which triggered their transition to the mainstream in the US.

The group continued to release successful records throughout the 1970s and 1980s, and their work with Van Morrison in 1988 resulted in the critically acclaimed album Irish Heartbeat. They went on to collaborate with many other well-known musicians and singers; among them Luciano Pavarotti, the Rolling Stones, Madonna, Sinéad O'Connor and Roger Daltrey.

In 2012, they celebrated their 50th anniversary with an ambitious album and tour. The album, Voice of Ages, was produced by T-Bone Burnett and featured the Chieftains collaborating with many musicians including Bon Iver, Paolo Nutini and The Decemberists. It also included a collaboration with NASA astronaut Catherine Coleman playing the flute aboard the International Space Station as it orbited the earth. The Chieftains performed at Carnegie Hall on March 17, 2012.

On 13 March 2020, the band announced that a few tour dates of their "Irish Goodbye Tour" had been postponed (until further notice) following the coronavirus situation. 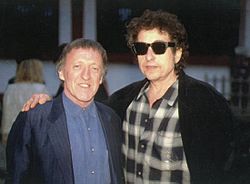 Paddy Moloney pictured with Bob Dylan, who is a fan of the band's work.

The band have become known for their vast work of collaborations with popular musicians of many genres, including country music, Galician traditional music, Newfoundland music, and rock and roll. Their widespread work as collaborators resulted in the Irish Government awarding the group the honorary title of Ireland's Musical Ambassadors in 1989.

They have performed with (in alphabetical order):

In May 1986, they performed at Self Aid, a benefit concert held in Dublin that focused on the problem of chronic unemployment which was widespread in Ireland at that time. In 1994, they appeared in Roger Daltrey's production, album and video of A Celebration: The Music of Pete Townshend and The Who.

They also performed with Canadian astronaut Cmdr. Chris Hadfield in Houston, TX on 15 February 2013. Cmdr. Hadfield sang and played guitar on "Moondance" from aboard the International Space Station.

The band has won six Grammy Awards and been nominated eighteen times. They have won an Emmy and a Genie and contributed tracks, including their highly praised version of the song Women of Ireland, to Leonard Rosenman's Oscar-winning score for Stanley Kubrick's 1975 film Barry Lyndon. In 2002 they were given a Lifetime Achievement Award by the UK's BBC Radio 2. Two of their singles have been minor hits in the UK Singles Chart. "Have I Told You Lately" (credited to The Chieftains with Van Morrison) reached No. 71 in 1995. "I Know My Love" (credited to The Chieftains featuring The Corrs) reached No. 37 in 1999.

Dr. Gearóid Ó hAllmhuráin said the success of The Chieftains helped place Irish traditional music on a par with other musical genres in the world of popular entertainment. By collaborating with pop and rock musicians, they have taken Irish music to a much wider audience. They have become, in effect, musical ambassadors for Ireland. This de facto role was officially recognised by the Irish Government in 1989 when it awarded the group the honorary title of Ireland's Musical Ambassadors.

They played in a concert for Pope John Paul II, before an audience of more than one million people in 1979 in Phoenix Park in Dublin, to mark the Papal visit to Ireland.

In 1983, they were invited by the Chinese Government to perform with the Chinese Broadcasting Art Group in a concert on the Great Wall of China, becoming the first western musical group to do so. They were the first group to perform in the Capitol Building in Washington, D.C., invited by Senator Edward Kennedy and the former Speaker of the House, Tip O'Neill.

In 2011, they performed at a concert in Dublin attended by President Mary McAleese and Queen Elizabeth II of Britain during her first ever official trip to the Republic of Ireland.

All content from Kiddle encyclopedia articles (including the article images and facts) can be freely used under Attribution-ShareAlike license, unless stated otherwise. Cite this article:
The Chieftains Facts for Kids. Kiddle Encyclopedia.