Natalie MacMaster CM ONS (born June 13, 1972) is a Canadian fiddler from the rural community of Troy in Inverness County, Nova Scotia who plays Cape Breton fiddle music. MacMaster has toured with the Chieftains, Faith Hill, Carlos Santana and Alison Krauss, and has recorded with Yo-Yo Ma. She has appeared at the Celtic Colours festival in Cape Breton, Celtic Connections in Scotland, and MerleFest in the United States. 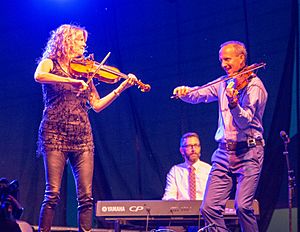 MacMaster is the daughter of Alex and Minnie (née Beaton) MacMaster and the sister of Kevin and David MacMaster. She is the niece of the late renowned Cape Breton fiddler Buddy MacMaster and the cousin of two other fiddlers, Ashley MacIsaac and Andrea Beaton. She is also distantly related to Jack White.

In 2002, she married fiddler Donnell Leahy of the Leahy family band, and moved to Lakefield, Ontario. Leahy and MacMaster have seven children, and have performed and recorded together as a duo, and occasionally include their children, who also play fiddles, in their performances.

MacMaster began playing the fiddle at the age of nine, and made her performing debut the same year at a square dance in Glencoe Mills, Nova Scotia. When she was sixteen she released her first album, Four on the Floor, and a second album, Road to the Isle, followed in 1991. Her first album was self-produced, while her second was co-produced by John Morris Rankin (The Rankin Family) and Tom O'Keefe (as per original cassette jacket). Both albums were initially released only on cassette, but Rounder Records omitted a few tracks and re-released as A Compilation in 1998. In 1999, she performed at the Juno Awards show in Hamilton.

In recent years she has expanded her musical repertoire, mixing her Cape Breton roots with music from Scotland and Ireland, as well as American bluegrass.

All content from Kiddle encyclopedia articles (including the article images and facts) can be freely used under Attribution-ShareAlike license, unless stated otherwise. Cite this article:
Natalie MacMaster Facts for Kids. Kiddle Encyclopedia.