The Corrs facts for kids

This article is about the Irish rock band. For the American rock band, see The Cars.

The Corrs is a folk pop rock band from Ireland. There are three sisters and one brother in the quartet. They became very popular in the late 1990s. 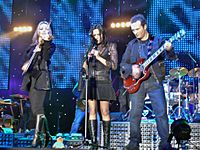 They were all born in Dundalk, Republic of Ireland, the children of Gerry and Jean Corr.

Jim Corr (born 31 July 1964) is the oldest member of the group. He mainly plays the guitar, but he can also play the on the keyboards and the piano.

Sharon Corr (born 24 March 1970) plays the violin, keyboards, and does backing vocals and vocals on her own (vocals means "singing").

Caroline Corr, (born 17 March 1973) plays the drums, the "percussion", the bodhran, the piano, and also does backing vocals.

Andrea Corr (born 17 May 1974) plays the tin whistle and does the lead vocals.

The Corrs created themselves in 1991 to try to get in the movie The Commitments. Jim, Sharon, and Caroline got a small part as musicians, while Andrea got a speaking part as Sharon Rabbitte, sister of the main character. It was while they were trying out for this movie that they were noticed by their manager, John Hughes.

Their music has been released through Atlantic Records, a music company.

Their first album, Forgiven, Not Forgotten, was most popular in Australia. They then did another album called Talk On Corners, which was very popular in Ireland and Britain.

DVDs they have been on

All content from Kiddle encyclopedia articles (including the article images and facts) can be freely used under Attribution-ShareAlike license, unless stated otherwise. Cite this article:
The Corrs Facts for Kids. Kiddle Encyclopedia.