Kids Encyclopedia Facts
This page is about the town of Dundalk in Ireland. For other uses, see Dundalk (disambiguation).

Dundalk ( Irish: Dún Dealgan, meaning Dalgan's fort) is the county town of County Louth, Ireland. It is on the Castletown River, which flows into Dundalk Bay, and is near the border with Northern Ireland, halfway between Dublin and Belfast. It has associations with the mythical warrior hero Cú Chulainn.

The Dundalk area has been inhabited since at least 3500 BC, in the Neolithic period. A tangible reminder of their presence can still be seen in the form of the Proleek Dolmen, the eroded remains of a megalithic tomb located in the Ballymascanlon area to the north of Dundalk. Celtic culture arrived in Ireland around 500 BC. According to the legendary historical accounts, the group settled in North Louth were known as the Conaille Muirtheimne and took their name from Conaill Carnagh, legendary chief of the Red Branch Knights of Ulster. Their land now forms upper and lower Dundalk.

Dundalk had been originally developed as an unwalled Sráid Bhaile (meaning village; translates literally as "Street Townland"). The streets passed along a gravel ridge which runs from the present day Bridge Street in the North, through Church Street to Clanbrassil Street to Earl Street, and finally to Dublin Street. 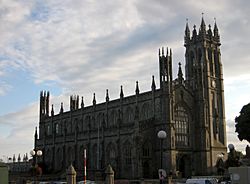 In 1169 the Normans arrived in Ireland and set about conquering large areas. By 1185 a Norman nobleman named Bertram de Verdun erected a manor house at Castletown Mount and subsequently obtained the town's charter in 1189. Another Norman family, the De Courcys, led by John de Courcy, settled in the Seatown area of Dundalk, the "Nova Villa de Dundalke". Both families assisted in the fortification of the town, building walls and other fortification in the style of a Norman fortress. The town of Dundalk was developed as it lay close to an easy bridging point over the Castletown River and as a frontier town, the northern limit of The Pale. In 1236 Bertram's granddaughter, Rohesia commissioned Castle Roche to fortify the region, and to offer protection from the Irish territory of Ulster.

The town was sacked in 1315, during the Bruce campaign. After taking possession of the town Edward Bruce proclaimed himself King of Ireland and remained here for nearly a whole year before his army was totally defeated and himself slain after being attacked by John de Birmingham.

Dundalk had been under Royalist (Ormondist) control for centuries, until 1647 when it became occupied by The Northern Parliamentary Army of Colonel George Monck.

The modern town of Dundalk largely owes its form to Lord Limerick (James Hamilton, later 1st Earl of Clanbrassil) in the 17th century. He commissioned the construction of streets leading to the town centre; his ideas came from many visits to Europe. In addition to the demolition of the old walls and castles, he had new roads laid out eastwards of the principal streets. The most important of these new roads connected a newly laid down Market Square, which still survives, with a linen and cambric factory at its eastern end, adjacent to what was once an army cavalry and artillery barracks (now Aiken Barracks).

In the 19th century the town grew in importance and many industries were set up in the local area, including a large distillery. This development was helped considerably by the opening of railways, the expansion of the docks area or 'Quay' and the setting up of a board of commissioners to run the town.

The partition of Ireland in May 1921 turned Dundalk into a border town and the Dublin–Belfast main line into an international railway. The Irish Free State opened customs and immigration facilities at Dundalk to check goods and passengers crossing the border by train. The Irish Civil War of 1922–23 saw a number of confrontations in Dundalk. The local Fourth Northern Division of the Irish Republican Army under Frank Aiken, who took over Dundalk barracks after the British left, tried to stay neutral but 300 of them were detained by the National Army in August 1922. However, a raid on Dundalk Gaol freed Aiken and over 100 other anti-treaty prisoners; two weeks later he retook Dundalk barracks and captured its garrison before freeing the remaining republican prisoners there. Aiken did not try to hold the town, however, and before withdrawing he called for a truce in a meeting in the centre of Dundalk. The 49 Infantry Battalion and 58 Infantry Battalion of the National Army were based in Dundalk along with No.8 armoured locomotive and two fully armoured cars of their Railway Protection Corps.

For several decades after the end of the Civil War, Dundalk continued to function as a market town, a regional centre, and a centre of administration and manufacturing. Its position close to the border gave it considerable significance during the "Troubles" of Northern Ireland. Many people were sympathetic to the cause of the Provisional Irish Republican Army and Sinn Féin. It was in this period that Dundalk earned the nickname 'El Paso', after the Texan border town of the same name on the border with Mexico.

On 1 September 1973, the 27 Infantry Battalion of the Irish Army was established with its Headquarters in Dundalk barracks, renamed Aiken Barracks in 1986 in honour of Frank Aiken.

Dundalk suffered economically when Irish membership of the European Economic Community in the 1970s exposed local manufacturers to foreign competition that they were ill equipped to cope with. Today many international companies have factories in Dundalk, from food processing to high-tech computer components. Harp Lager, a beer produced by Diageo, is brewed in the Great Northern Brewery, Dundalk.

The Earls of Roden had property interests in Dundalk for over three centuries, and at an auction in July 2006 the 10th Earl sold his freehold of the town, including ground rents, mineral rights, manorial rights, the reversion of leases and the freehold of highways, common land, and the fair green. Included in the sale were many documents, such as a large 18th century estate map. The buyer was undisclosed.

A bend between six martlets forms the coat of arms. The bend and martlets are derived from the family of Thomas de Furnivall who obtained a large part of the land and property of Dundalk and district in about 1309 by marriage to Joan de Verdon daughter of Theobald de Verdon (an Anglo-Norman family). Three of these martlets, in reversed tinctures, form the arms of Dundalk FC. The ermine boar supporter is derived from the arms of the Ó hAnluain (O'Hanlon) family, Kings of Airthir.

Situated where the Castletown River flows into Dundalk Bay, the town is close to the border with Northern Ireland (3.5 km direct point-to-point aerial transit path border to border) and equidistant from Dublin and Belfast.

Similar to much of northwest Europe, Dundalk experiences a maritime climate, sheltered by the Cooley and Mourne Mountains to the North, and undulating hills to the West and South, the town experiences cool winters, mild summers, and a lack of temperature extremes.

Population by place of birth:

Population by ethnic or cultural background:

Places of interest in North Louth within 15 km of Dundalk.

Dundalk has a vibrant music environment.

All content from Kiddle encyclopedia articles (including the article images and facts) can be freely used under Attribution-ShareAlike license, unless stated otherwise. Cite this article:
Dundalk Facts for Kids. Kiddle Encyclopedia.