King's College Chapel is the chapel at King's College in the University of Cambridge. It is considered one of the finest examples of late Perpendicular Gothic English architecture. The chapel was built in phases by a succession of kings of England from 1446 to 1515, a period which spanned the Wars of the Roses. The chapel's large stained glass windows were not completed until 1531, and its early Renaissance rood screen was erected in 1532–36. The chapel is an active house of worship, and home of the King's College Choir. The chapel is a significant tourist site and a commonly used symbol of the city of Cambridge.

Building of the chapel

Henry VI planned a university counterpart to Eton College. The first stone of the Chapel was laid, by Henry himself, on the Feast of St James the Apostle, 25 July 1446, the College having been begun in 1441. By the end of the reign of Richard III (1485), despite the Wars of the Roses, five bays had been completed and a timber roof erected. Henry VII visited in 1506, paying for the work to resume and even leaving money so that the work could continue after his death. In 1515, under Henry VIII, the building was complete but the great windows had yet to be made.

The chapel features the world's largest fan vault, constructed between 1512 and 1515 by master mason John Wastell. It also features fine medieval stained glass and, above the altar, The Adoration of the Magi by Rubens, originally painted in 1634 for the Convent of the White Nuns at Louvain in Belgium. The painting was installed in the Chapel in 1968. 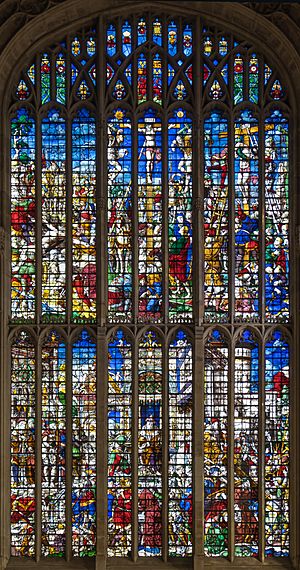 During the Civil War the chapel was used as a training ground by Oliver Cromwell's troops, but escaped major damage, possibly because Cromwell himself, being a Cambridge student, gave orders for it to be spared. Graffiti left by these soldiers is still visible on the north and south walls near the altar. During World War II most of the stained glass was removed and the chapel again escaped damage.

The windows of King's College Chapel are some of the finest in the world from their era. There are 12 large windows on each side of the chapel, and larger windows at the east and west ends. With the exception of the west window, they are by Flemish hands and date from 1515 to 1531. Barnard Flower, the first non-Englishman appointed as the King's Glazier, completed four windows. Gaylon Hone and three partners are responsible for the east window and 16 others between 1526 and 1531. The final four were made by Francis Williamson and Symon Symondes. The one modern window is that in the west wall, which was donated by King's alumnus Francis Stacey and is by the Clayton and Bell company and dates from 1879. 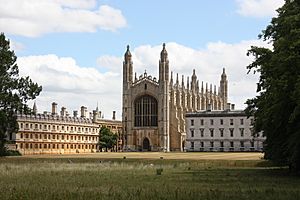 The Chapel is actively used as a place of worship and also for some concerts and college events. Notable college events include the annual King's College Music Society May Week Concert, held on the Monday of May Week. The event is highly popular with students, alumni and visitors to the city.

The Chapel is noted for its splendid acoustics. The world-famous Chapel choir consists of choral scholars, organ scholars (male students at the college), and choristers (boys educated at the nearby King's College School). The choir sings services on most days in term-time, and also performs concerts and makes recordings and broadcasts.

In particular, it has broadcast its Nine Lessons and Carols on the BBC from the Chapel on Christmas Eve. There is also a chapel choir of male and female students, King's Voices, which sings Evensong on Mondays during term-time.

Dean of the Chapel 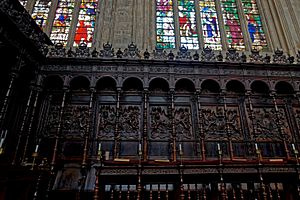 The Dean of the Chapel is responsible to the College Council and the Governing Body for the conduct of services within the Chapel. King's College Chapel, like other Cambridge colleges, is not formally part of the structure of the Church of England, but the Dean is customarily licensed by the Bishop of Ely. Both he and the Chaplain take a regular part in chapel services: each is normally present at services six days a week during Full Term, and each preaches once or twice a term.

All content from Kiddle encyclopedia articles (including the article images and facts) can be freely used under Attribution-ShareAlike license, unless stated otherwise. Cite this article:
King's College Chapel, Cambridge Facts for Kids. Kiddle Encyclopedia.