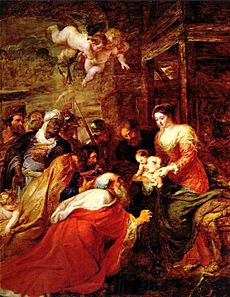 The Adoration of the Magi (1634) by Peter Paul Rubens. This painting shows the Three Wise Men visiting the baby Jesus. The painting hangs behind the altar in King's College Chapel, Cambridge.

The Festival of Nine Lessons and Carols is a form of church service used at Christmas in the Anglican Church. There are nine lessons (readings) and between each reading there is a carol sung, either by the choir on its own or by the whole congregation. The story is told from the beginning of the Bible in which Adam disobeys God, to the coming of the baby Jesus.

The form of the service was started by Edward White Benson who was Bishop of Truro in Cornwall, for use on Christmas Eve (24 December) 1880. The service is now used by other churches all over the world, not just in Anglican churches, but also in some Roman Catholic and Lutheran churches. In the UK, the service has become the standard form for schools' Christmas carol services.

The best-known Nine Lessons and Carols service is the one held in King's College, Cambridge every Christmas. The choir carols are sung by the famous Choir. This service has been broadcast by the BBC for more than half a century. 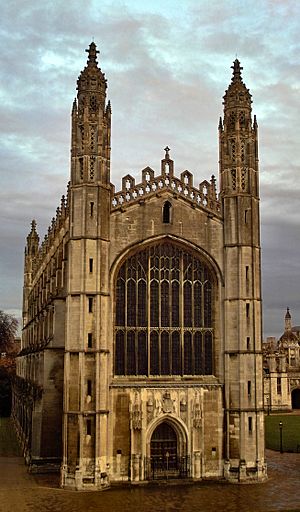 The first Festival of Nine Lessons and Carols at King's College, Cambridge, was held on Christmas Eve in 1918. The music at the first service was directed by Arthur Henry Mann, who was the organist from 1876 to 1929. The choir had 16 trebles which was the number that Henry VI said there must be when he founded the college. Until 1927 the men in the choir were choral scholars and lay clerks. Today, 14 undergraduates from the Choir of King's College, Cambridge, sing the men's parts.

The service was first broadcast by the British Broadcasting Corporation in 1928 and, except for 1930, has been broadcast every year since, even throughout World War II in spite of the stained glass having been removed from the Chapel and the lack of heating. The service is slightly different today: not all the readings are from the Bible. Most of the carols are sung by the choir. There are generally more than nine carols. The service starts with the famous carol "Once in Royal David's City". Verse one is always sung as an unaccompanied solo by one of the boys in the choir. The boy is not told that he is the one who has been chosen to sing the solo until just before the service begins.

Since 1982 the Director of Music has been Stephen Cleobury. Each year he commissions a composer to write a new carol for the Choir. The service ends with the carol "O Come all ye faithful". This is followed by the Organ Voluntary: "In Dulci Jubilo" (BWV 729) by Johann Sebastian Bach and then another Organ Piece (which is heard on the radio but not on television).

All content from Kiddle encyclopedia articles (including the article images and facts) can be freely used under Attribution-ShareAlike license, unless stated otherwise. Cite this article:
Nine Lessons and Carols Facts for Kids. Kiddle Encyclopedia.