Carolyn Sue Jones (April 28, 1930 – August 3, 1983) was an American actress of television and film. Jones began her film career in the early 1950s, and by the end of the decade had achieved recognition with a nomination for an Academy Award for Best Supporting Actress for The Bachelor Party (1957) and a Golden Globe Award as one of the most promising actresses of 1959. Her film career continued for another 20 years. In 1964, she began playing the role of Morticia Addams (as well as her sister Ophelia and the feminine counterpart of Thing, Lady Fingers), in the original black and white television series The Addams Family, receiving a Golden Globe Award nomination for her work.

Jones was born in Amarillo, Texas, the daughter of Cloe Jeanette Southern, a housewife, and Julius Alfred Jones, a barber. In 1934, her father abandoned the family and her mother moved with her two children to her parents' home in Amarillo. In 1935, Carolyn, her younger sister Bette, her mother, and her grandparents were living in Des Moines, Iowa, but by 1940, they were back in Amarillo.

Carolyn suffered from severe asthma that often restricted her childhood activities. She was an avid reader, and loved Hollywood magazines. When her condition permitted she loved to go to the movies. She enrolled at the Pasadena Playhouse in California, although at 15 she was still three years under the minimum age; her grandfather agreed to pay her tuition. 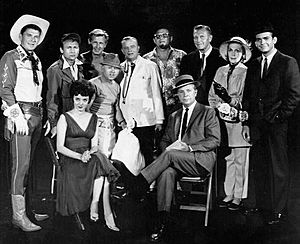 After being spotted by a talent scout at the Playhouse, Jones secured a contract with Paramount Pictures and made her first film, The Turning Point, in 1952. In 1953, she married aspiring filmmaker Aaron Spelling. She appeared in several episodes of Dragnet, credited as Caroline Jones in at least one episode; had an uncredited bit part as a nightclub hostess in The Big Heat, and a role in House of Wax as the woman who is converted by Vincent Price into a Joan of Arc statue. In 1954, she played Beth in Shield for Murder, earning $500 per day for playing the role.

Jones was cast in the film From Here to Eternity (1953) in the role of Alma "Lorene" Burke, which was written for her. However, a bout with pneumonia forced her to withdraw; the role earned Donna Reed the Academy Award for Best Supporting Actress.

Jones made her television debut on the DuMont series Gruen Playhouse in 1952. She appeared in two Rod Cameron syndicated series, City Detective and State Trooper, as Betty Fowler in the 1956 episode, "The Paperhanger of Pioche". She guest-starred in Ray Milland's CBS sitcom, Meet Mr. McNutley. She made five appearances on the crime drama series Dragnet, starring Jack Webb, between 1953 and 1955. In 1955, Jones appeared on the CBS anthology series Alfred Hitchcock Presents in the episode "The Cheney Vase" as a secretary assisting her scheming boyfriend Darren McGavin in attempting an art theft, and opposite Ruta Lee.

In 1956, Jones appeared in Invasion of the Body Snatchers and in Alfred Hitchcock's remake of The Man Who Knew Too Much. In 1957, she had the lead in the episode "The Girl in the Grass" on CBS's Schlitz Playhouse, with once again Ray Milland and Nora Marlowe.

She appeared three times as a guest star on the television series Wagon Train, in the first-season episode "The John Cameron Story" (1957) and in the later color episodes "The Jenna Albright Story" (1961) and "The Molly Kincaid Story" (1963).

In 1958, she was nominated for an Academy Award for Best Supporting Actress for The Bachelor Party, and she also shared a Golden Globe Award for "Most Promising Newcomer" with Sandra Dee and Diane Varsi, and appeared with Elvis Presley in King Creole.

In 1959, she played opposite Frank Sinatra in Frank Capra's A Hole in the Head, Dean Martin in Career, and Anthony Quinn and Kirk Douglas in Last Train from Gun Hill. In 1960, she guest-starred with James Best and Jack Mullaney in the episode "Love on Credit" of CBS's anthology series The DuPont Show with June Allyson, a Four Star Television production.

In the 1962–1963 season, Jones guest-starred on CBS's The Lloyd Bridges Show, which Spelling created. While married to Spelling, she appeared on the NBC program Here's Hollywood.

In the epic Western, How The West Was Won (1963), she played the role of Sheriff Jeb Rawlings' (George Peppard) wife. She appears with Peppard and Debbie Reynolds in the last speaking/singing scenes of the film.

In 1964, using a long coal-black wig, the brunette Jones began playing Morticia Addams on the television series The Addams Family, a role which brought her success as a comedian and a Golden Globe Award nomination. She guest-starred on the 1960s TV series Batman, playing Marsha, the Queen of Diamonds, and in 1976 appeared as the title character's mother, Hippolyta, on the Wonder Woman TV series. Her last role was that of Myrna, the scheming matriarch of the Clegg Clan, on the soap opera Capitol from the first episode in March 1982 until March 1983, though she already knew that she was dying of cancer. During her occasional absences, veteran actress Marla Adams subbed for her.

Her acting career declined after The Addams Family ended in 1966. Sporadic roles in the 1970s included that of Mrs. Moore, the wife of the plantation owner in the miniseries Roots.

Jones landed the role of the power-driven political matriarch Myrna Clegg in the CBS daytime soap opera Capitol in 1981. The following year, shortly after Capitol debuted, she was diagnosed with colon cancer, and played many of her scenes in a wheelchair. The cancer spread quickly to her liver and stomach. Despite the pain, Carolyn finished the first season.

Jones was married four times. While studying at the Pasadena Playhouse, Jones married Don Donaldson, a 28-year-old fellow student. The couple soon divorced. Jones was subsequently married to television producer Aaron Spelling from 1953 until their 1964 separation and divorce; Jones converted to Judaism when she married Spelling.

Her third marriage, in 1968, was to Tony Award-winning Broadway musical director, vocal arranger and co-producer Herbert Greene (who was her vocal coach); she left him in 1977.

In September 1982, realizing she was dying, Jones married her boyfriend of five years, actor Peter Bailey-Britton. She wore a lace and ribbon cap to hide the loss of her hair from chemotherapy.

Jones was diagnosed with colon cancer in March 1981. She continued to work, telling her friends she was being treated for ulcers. After a period of apparent remission, the cancer returned in 1982, and in July 1983, she fell into a coma at her home in West Hollywood, California. She died there on August 3, 1983.

All content from Kiddle encyclopedia articles (including the article images and facts) can be freely used under Attribution-ShareAlike license, unless stated otherwise. Cite this article:
Carolyn Jones Facts for Kids. Kiddle Encyclopedia.