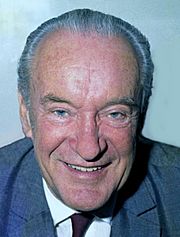 George Henry Sanders (July 3, 1906 – April 25, 1972) was an English movie, stage, voice, radio, and television actor, singer-songwriter, music composer, and writer. He was known for his roles in All About Eve, Rebecca, and The Jungle Book. He was also known for his television role as Mr. Freeze in Batman. His brother was actor Tom Conway. He won an Academy Award.

Sanders was born on July 3, 1906 in Saint Petersburg, Russian Empire to English parents. Sanders was raised in Brighton, Sussex, England. He studied at Brighton College and at Manchester Technical College.

All content from Kiddle encyclopedia articles (including the article images and facts) can be freely used under Attribution-ShareAlike license, unless stated otherwise. Cite this article:
George Sanders Facts for Kids. Kiddle Encyclopedia.