In Search of the Castaways (film) facts for kids 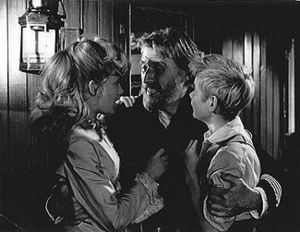 In Search of the Castaways is a 1962 Walt Disney Productions feature film starring Hayley Mills and Maurice Chevalier in a tale about a worldwide search for a shipwrecked sea captain. The film was directed by Robert Stevenson from a screenplay by Lowell S. Hawley freely based upon Jules Verne's 1868 adventure novel Captain Grant's Children.

In Search of the Castaways was Hayley Mills' third film in the series of six for the Disney Studios.

In Britain in the 19th century, Professor Paganel (Maurice Chevalier), a scientifically-thinking French geography professor, finds a bottle containing a note which he believes to have been written by the missing Captain John Grant (Jack Gwillim). Paganel and Grant's two teenaged children, Mary (Hayley Mills) and Robert (Keith Hamshere), approach John Glenarvan (Michael Anderson, Jr.) and his father, the wealthy shipping magnate Lord Glenarvan (Wilfrid Hyde-White), the owner of Captain Grant's ship, and persuade them to finance a search expedition. The expedition sets sail and ventures halfway around the world to South America.

In the Andes, an earthquake sends them down a mountain on a glacier. A giant condor snatches up Robert but Thalcave (Antonio Cifariello), an Indian chief, rescues him. He later claims to know the whereabouts of Captain Grant. After surviving a tidal wave and a lightning storm, the group discovers that the well-meaning Thalcave was mistaken. Meanwhile, a budding romance develops between young Mary Grant and Lord Glenarvan's son John.

They then depart for Australia, where Paganel feels sure they will find Captain Grant. In Melbourne they meet a treacherous gunrunner, Thomas Ayerton (George Sanders), who produces evidence that Captain Grant is in New Zealand. Unaware that Ayerton is the third mate who caused a mutiny on Grant's ship, the search party once more sets sail. Ayerton causes another mutiny and sets the group adrift. They are captured by Maori cannibals, and are imprisoned along with Captain Grant’s shipmate, Bill Gaye (Wilfrid Brambell), who helps them escape to a volcano. They evade their pursuers by starting an avalanche which triggers an eruption.

They finally find Captain Grant, overcome Ayerton and his mutineers, and sail for home. As they all sit around talking, the note that Professor Paganel initially found (and that was supposedly in Captain Grant’s handwriting) is brought up. Captain Grant states that he never wrote any note, to which Bill says: “The voice be the voice of a God-fearing man. But the hands are the hands of a forger”, implying that he imitated Captain Grant’s handwriting and wrote the note himself. In the final scene, the Professor points out John and Mary stargazing out at the railing, clearly falling for one another.

Songs composed by the Sherman Brothers include "Castaway", "Merci Beaucoup", "Let's Climb (Grimpons)", and "Enjoy It", with an orchestral arrangement of "Castaway" serving as the film's overture.

Other adaptations of Verne's novel

All content from Kiddle encyclopedia articles (including the article images and facts) can be freely used under Attribution-ShareAlike license, unless stated otherwise. Cite this article:
In Search of the Castaways (film) Facts for Kids. Kiddle Encyclopedia.