The Aristocats facts for kids

The Aristocats is a 1970 American animated movie. It was produced by Walt Disney Productions. It is the 20th movie in the Walt Disney Animated Classics series. The movie is based on a story by Tom McGowan and Tom Rowe. It is about a family of cats who are kidnapped by their owner's butler. It was originally released to theaters by Buena Vista Distribution on December 11, 1970, with a regular release on December 24, 1970. The title is a pun on the word aristocrats.

The movie's basic idea is an animated romantic musical comedy about talking cats in France. This idea had previously been used in the UPA animated feature Gay Purr-ee.

Disney planned to release a sequel, The Aristocats II in 2007. Production on that was canceled in early 2006.

The was the last movie to be approved by Walt Disney himself. Disney died before the movie was released.

The movie takes place in Paris in 1910. A mother cat named Duchess and her three kittens, Marie, Berlioz, and Toulouse, are going to receive a fortune when their owner dies. But Edgar, their butler, does not like this and plans to send the cats away.

He places sleeping tablets in their dinner. At night, he plans on dropping them off in the countryside. Two hound dogs, Napoleon and Lafayette, attack him, and the cats are now stranded.

In the morning, they meet an alley cat named Abraham de Lacy Giuseppe Casey Thomas O'Malley (called just Thomas O'Malley). He helps them on their way back home. He even lets them stay at his "pad" (the place where he and his "gang", or friends, stay).

They finally get back home, but Edgar recatches them in a sack and plans to send them to Timbuktu, Africa. O'Malley, Scat Cat and his gang, Roquefort and Frou-Frou all fight Edgar, while Roquefort rescues Duchess and kittens. In the end, Edgar is kicked into the trunk, locked inside, and sent to Timbuktu himself. Madame Adelaide's will is rewritten to not include Edgar and include O'Malley, and she starts a charity foundation which gives a home to all the cats in Paris.

This movie was the last one to be approved by Walt himself. It was the first one produced after his death. The movie took four years to produce. Its budget was 4,000,000. Five of Disney's legendary "Nine Old Men" worked on it, including the Disney crew that had been working 25 years on average.

The Aristocats was re-released to theaters on December 19, 1981 and April 10, 1987. It was released on VHS in the Masterpiece Collection series on April 24, 1996 and DVD on April 4, 2000 in the Gold Classic Collection line. The Aristocats Gold Collection disc was discontinued in 2006. A new single-disc Special Edition DVD (previously announced as a 2-Disc set) was released on February 5, 2008. The movie was also released on Blu-ray on August 21, 2012. 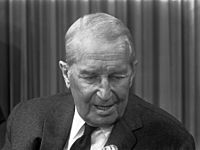 Maurice Chevalier (pictured here) was brought out of retirement to sing the title song.

All content from Kiddle encyclopedia articles (including the article images and facts) can be freely used under Attribution-ShareAlike license, unless stated otherwise. Cite this article:
The Aristocats Facts for Kids. Kiddle Encyclopedia.