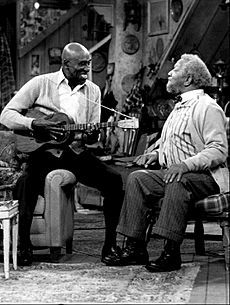 Crothers appearing with Redd Foxx on Sanford and Son

Benjamin Sherman "Scatman" Crothers (May 23 1910 – November 22 1986) was an American actor, singer, dancer and musician. He did many forms of acting including movies, television, stage, radio and voice acting. Crother was known for the voice role of the character Hong Kong Phooey in Hong Kong Phooey. He won a Saturn Award.

Crothers was born in Terre Haute, Indiana, but was raised in Dayton, Ohio. He was married to Helen Sullivan from 1937 until his death in 1986. Crothers died on November 22 1986 in Van Nuys, California from pneumonia caused by his lung cancer. He was 76 years old.

All content from Kiddle encyclopedia articles (including the article images and facts) can be freely used under Attribution-ShareAlike license, unless stated otherwise. Cite this article:
Scatman Crothers Facts for Kids. Kiddle Encyclopedia.