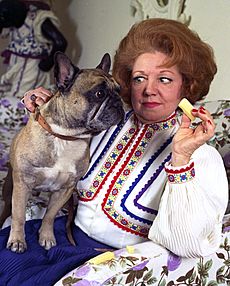 Hermoine Baddeley inside her apartment

Hermione Baddeley (13 November 1906 — 19 August 1986) was an English character actress. She played Mrs. Worth in The Happiest Millionaire in 1967. Three years before that, she played Ellen in the 1964 musical Mary Poppins, which won several Academy Awards. She played Madame Adelaide in The Aristocats.

Baddeley was born in Broseley, Shropshire, England. She died at age 79 in Los Angeles after suffering several strokes.

All content from Kiddle encyclopedia articles (including the article images and facts) can be freely used under Attribution-ShareAlike license, unless stated otherwise. Cite this article:
Hermione Baddeley Facts for Kids. Kiddle Encyclopedia.