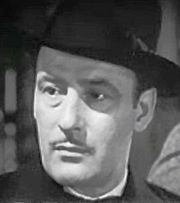 Conway in 1942
Not to be confused with Tim Conway.

Thomas Charles Sanders ("Tom Conway", September 15, 1904 – April 22, 1967) was an English movie, television, voice, stage, and radio actor. He was known for his roles in 101 Dalmatians, Peter Pan, Cat People, I Walked with a Zombie, and in The Seventh Victim. He was the older brother of actor George Sanders.

Conway was born on September 15, 1904 in St. Petersburg, Russia to English parents. He was raised in Bringhton, England, and studied at Brighton College.

Conway died on April 22, 1967 in Culver City, California from cirrhosis of the liver, aged 62.

All content from Kiddle encyclopedia articles (including the article images and facts) can be freely used under Attribution-ShareAlike license, unless stated otherwise. Cite this article:
Tom Conway Facts for Kids. Kiddle Encyclopedia.