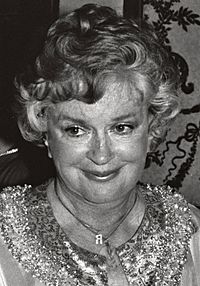 Her first movie role was in Cheers for Miss Bishop and appeared in many Warner Bros. movies, including Eyes in the Night, Yankee Doodle Dandy playing Nellie Cohan, This Is The Army alongside Ronald Reagan, Rhapsody in Blue, and Nora Prentiss.

She played the mother of the character played by Sabu Dastagir in Jungle Book.

DeCamp died at her home in Newport Beach, California on February 20, 2001 from pneumonia, aged 90.

All content from Kiddle encyclopedia articles (including the article images and facts) can be freely used under Attribution-ShareAlike license, unless stated otherwise. Cite this article:
Rosemary DeCamp Facts for Kids. Kiddle Encyclopedia.