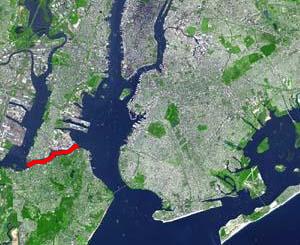 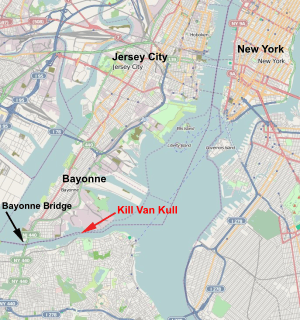 The Kill Van Kull is a tidal strait between Staten Island, New York and Bayonne, New Jersey in the United States. It is approximately 3 miles (4.8 km) long and 1,000 feet (305 m) wide and connects Newark Bay with Upper New York Bay. The Robbins Reef Light marks the eastern end of the Kill, Bergen Point its western end. It is spanned by the Bayonne Bridge and is one of the most heavily traveled waterways in the Port of New York and New Jersey.

Historically, it has been one of the most important channels for the commerce of the region, providing a passage for marine traffic between Upper New York Bay and the industrial towns of northeastern New Jersey. During the colonial era, it played a significant role in travel between New York and the southern colonies, with passengers changing from ferries to coaches at Elizabethtown (now Elizabeth).

Since the final third of the 20th century, it has provided the principal access for oceangoing container ships to Port Newark-Elizabeth Marine Terminal, the busiest port facility in the eastern United States, and Howland Hook Marine Terminal. The strait has required continued dredging and deepening to accommodate the passage of ever-larger ships. In many areas, the sandy bottom has been excavated down to rock and now requires blasting. The Bayonne Bridge's deck was raised in 2017 so that New Panamax ships could travel the Kill Van Kull.

Kill Van Kull translates as "channel of the pass" or "ridge". Nearby is the Arthur Kill, the name of which is an Anglicization of achter kill meaning "back channel", referring to its location "behind" Staten Island.

The name "Kill Van Kull" originated in the early 17th century, during the Dutch colonial era, when the region was part of New Netherland. Places were named by early explorers and settlers in reference to their shape, topography, or other geographic qualities. The area around Newark Bay was called Achter Kol. The bay lies behind Bergen Hill, the emerging ridge of the Hudson Palisades which begins on Bergen Neck, the peninsula between it and the Upper New York Bay. Behind or achter the ridge was a col or mountain pass to the interior. Kill comes from the Middle Dutch word kille meaning creek. The bay was known as Cull Bay during the British colonial era.

All content from Kiddle encyclopedia articles (including the article images and facts) can be freely used under Attribution-ShareAlike license, unless stated otherwise. Cite this article:
Kill Van Kull Facts for Kids. Kiddle Encyclopedia.