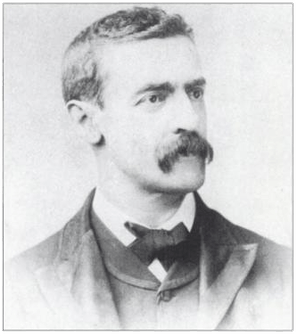 William Abner Eddy (January 28, 1850 – December 26, 1909) was an American accountant and journalist famous for his photographic and meteorological experiments with kites. The scientific significance of Eddy's improvements to kite-flying was short-lived, due to the advent of Lawrence Hargrave's rectangular box kites. Nevertheless, in the year following Eddy's death, a train of ten Eddy kites reaching an altitude of 23,385 feet (7,128 m) set a height record for several years.

William A. Eddy was born to a wealthy family in New York City. His father was a reverend. William's experience with kites started at an early age: When he was 15, he successfully tied a lantern to a hexagonal kite. After graduation from the University of Chicago he returned to New York, where he would soon work as an accountant for the New York Herald. 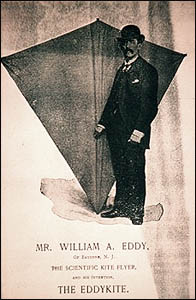 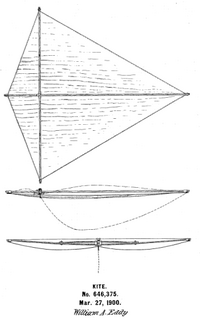 It seems that Eddy's interest in kites was renewed when he learned about recent advances. In 1883, Douglas Archibald used kites to measure differences in wind velocity. Alexander McAdie repeated Benjamin Franklin's kite experiments with an electrometer. In 1887, Eddy heard of Woodbridge Davis' maneuverable kites. Based on accounts of tailless diamond kites common in Java, he tried to fill in the missing details. In standard diamond kites the tail was needed for stabilization, but was problematic when chaining several kites in order to reach higher altitudes. He added a bow in the cross spar and a hole at the crossing of the sticks.

In 1893, the World's Columbian Exposition gave him the chance to acquire an authentic Malay kite, which inspired further improvements and led to what is now known as the diamond Eddy kite. He also improved the method for chaining several kites. Previously each kite had been tied to the previous one. Instead, he made the individual kites' lines branch off a common main line.

Eddy's publication of air temperatures measured with his kites attracted the attention of the American Meteorological Society. In 1894, he followed an invitation to assist the work of Blue Hill Meteorological Observatory. He solved the observatory's technical problems, thereby contributing significantly to its reputation.

The New York Times regularly reported on Eddy's curious accidents, plans, and results. For example, in 1897: playing children interfered with his experiments during the night. In 1898, he hoped to assist the navy in the Spanish–American War. On Christmas Day 1900, he found that the wild ducks at the coast were flying at 47 miles per hour (76 km/h) at an altitude of 1,500 feet (460 m). In 1908, Eddy took kite aerial photographs in order to solve the theft of ice cream from his back porch; one photo showed two men eating the lot.

Except where noted otherwise, all information comes from the following article:

All content from Kiddle encyclopedia articles (including the article images and facts) can be freely used under Attribution-ShareAlike license, unless stated otherwise. Cite this article:
William Abner Eddy Facts for Kids. Kiddle Encyclopedia.