USS Becuna (SS/AGSS-319), a Balao-class submarine, is a former ship of the United States Navy named for the becuna, a pike-like fish of Europe. She was designated a National Historic Landmark for her service in World War II, for which she earned four battle stars. She presently serves as a museum ship at the Independence Seaport Museum in Philadelphia, Pennsylvania.

Becuna departed New London 1 July 1944 and arrived at Pearl Harbor 29 July. Her war operations extended from 23 August 1944 to 27 July 1945. During this period she completed five war patrols in the Philippines, South China Sea, and the Java Sea. Becuna is credited with having sunk two Japanese tankers totaling 3,888 tons.

The submarine arrived at Subic Bay, Luzon, from her last war patrol 27 July 1945. In September 1945 she arrived at San Diego.

Between May 1949 and May 1950 she conducted refresher training exercises and also assisted in training of student officers and men at New London, Connecticut. In November 1950 she returned to Electric Boat Co., for a complete modernization overhaul, being refitted as a GUPPY-type submarine. The overhaul was completed in August 1951, and Becuna sailed to the Caribbean for shakedown. She returned to New London in September 1951.

Becuna operated with the Atlantic Fleet, making two cruises with the 6th Fleet in the Mediterranean and one to Scotland. Other than these extended cruises, the majority of Becuna's service was at New London as a training submarine. 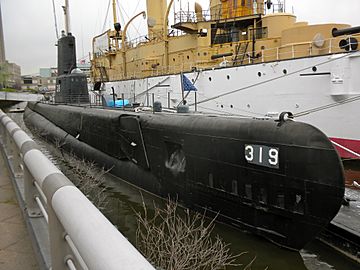 Becuna in Philadelphia. Note the difference in her appearance after her extensive modernization in 1951.

Becuna was decommissioned on 7 November 1969, and laid up in the Atlantic Reserve Fleet. She reverted to SS-319 in 1971. She was stricken from the Naval Register on 15 August 1973.

Becuna was placed on permanent display adjacent to the cruiser USS Olympia (C-6) at Penn's Landing in Philadelphia on 21 June 1976. Since 1996 both vessels have been operated by the Independence Seaport Museum.

She was designated a National Historic Landmark in 1986. In 2001, Becuna received the Historical Welded Structure Award of the American Welding Society.

All content from Kiddle encyclopedia articles (including the article images and facts) can be freely used under Attribution-ShareAlike license, unless stated otherwise. Cite this article:
USS Becuna Facts for Kids. Kiddle Encyclopedia.