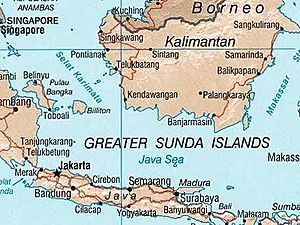 Map of the Java Sea 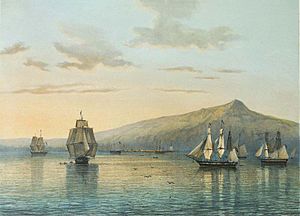 Coast of Java Sea off Anyer.

The Java Sea is a large shallow sea on the Sunda Shelf. It is 320,000 km². It was formed as sea levels rose at the end of the last ice age. The Java Sea is between the Indonesian islands of Borneo to the north, Java to the south; Sumatra to the west, and Sulawesi to the east. Karimata Strait to its northwest links it to the South China Sea.

Fishing is an important economic activity in the Java Sea. There are over 3,000 species of marine life in the area. A number of national parks are in the area such as Karimunjawa. The Thousand Islands are north of the mainland Jakarta. The area around the Java Sea is a popular tourist destination. Scuba diving lets people explore and photograph underwater caverns, wrecks, coral, sponges, and other marine life.

The Battle of the Java Sea, during February and March 1942, was one of the costliest naval battles of World War II. The naval forces of the Netherlands, Britain, Australia, and the U.S. were nearly completely destroyed trying to defend Java from Japanese attack.

All content from Kiddle encyclopedia articles (including the article images and facts) can be freely used under Attribution-ShareAlike license, unless stated otherwise. Cite this article:
Java Sea Facts for Kids. Kiddle Encyclopedia.