Museum of the American Revolution facts for kids

The museum owns a collection of several thousand objects including artwork and sculpture, textiles and weapons, manuscripts and rare books. Permanent and special exhibition galleries, theaters and large-scale tableaux portray the individuals and events and engage people in the history and continuing relevance of the American Revolution.

General John P. Jumper serves as the Chairman of the Board of the Directors. Dr. R. Scott Stephenson was named President and CEO in November 2018. Philadelphia area media entrepreneur and philanthropist H. F. "Gerry" Lenfest served as chairman of the board of directors from 2005 until 2016 and was instrumental in leading the Museum to its opening in 2017.

The museum is located in the historic heart of Philadelphia, the city that served as the headquarters of America's founding. The site is across the street from the First Bank of the United States and two blocks from Independence Hall, the National Constitution Center, Second Bank of the United States, American Philosophical Society, Carpenters' Hall, and the Liberty Bell.

The building was designed by Robert A.M. Stern Architects (RAMSA), and on June 12, 2012, RAMSA partner and Driehaus Prize winner Robert A. M. Stern unveiled designs for the permanent location. Groundbreaking for the museum occurred in fall 2014.

The museum rises three stories above the street and, with a full basement, encompasses 118,000 total square feet, with 32,000 dedicated to exhibits and interpretive spaces. The first floor includes a museum shop and the Cross Keys Café which opens to the sidewalk. The first floor interior is organized around a skylit central interior court and features a cross-vaulted ticketing lobby, a multi-use theater and a changing exhibition gallery. The second floor features 18,000 square feet of galleries and a theater dedicated to the exhibition of George Washington's marquee tent. The museum's third floor offers rooms for events and two terraces overlooking the First Bank of the United States, Independence National Historical Park, and the Philadelphia skyline beyond. The museum is seeking Leadership in Energy and Environmental Design (LEED) Silver certification.

The Museum's outdoor plaza opened on 25 September 2016. It is accessible to both museum visitors and to passersby, and feature dramatic installations of Revolutionary War artifacts, bronze sculpture, shaded seating, and – once the museum building opens, seasonal café seating.

Visitors follow a chronological journey from the roots of conflict in the 1760s to the rise of armed resistance, the Declaration of independence of 1776 through the final years of the war. Visitors see the diversity of revolutionary-era Americans and their opinions, for example by viewing an Oneida Indian council house, and the 1773 volume Poems on Various Subjects by Phillis Wheatley, America's first published black female poet.

Several immersive gallery experiences feature a full-scale replica of Boston's Liberty Tree, the recreation of an Oneida Indian Council, the Battlefield Theater featuring the Battle of Brandywine, a recreation of Independence Hall, and a large model of an 18th-century privateer ship. A dedicated theater houses an iconic surviving artifact of the Revolution: General Washington's Headquarters Tent, which served as both his office and sleeping quarters throughout much of the war.

The Museum's President and CEO, formerly the Vice President of Collections, Exhibitions, and Programming, Dr. R. Scott Stephenson holds an M.A. and Ph.D. in American History from the University of Virginia. Stephenson is a specialist in colonial and revolutionary American history and material culture with a background in visual storytelling. Dr. Philip C. Mead, Chief Historian and Director of Curatorial Affairs, holds an M.A. and PhD in American History from Harvard University. 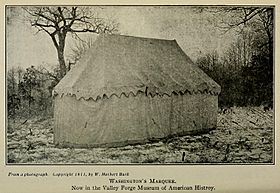 The Museum of the American Revolution has a collection of several thousand objects. The museum's collection includes items owned and used by General George Washington during the War of Independence, an extensive collection of historic firearms and edged weapons, important art, important manuscripts, and rare books. The collection started by Rev. W. Herbert Burk in the early 1900s makes up the core of the collection.

Selections from the collection

In 2012, the museum received the MUSE Award (Silver level) from the American Alliance of Museums in the category of Mobile Applications, recognizing the museum's American Revolution Interactive Timeline iPad app.

In 2017, the museum received the Pennsylvania Historic Preservation Award in the category of Preservation Planning for Washington's War Tent.

In 2017, the museum won an Award of Merit from the British Guild of Travel Writers.

In 2017, the museum was named Engineering News-Record’s Best Projects 2017 Award of Merit in the Cultural/Worship Category.

In 2018, the museum received an Excellence in Exhibition Award for Special Achievement for engaging audiences in something they think they know in new ways from the American Alliance of Museums (AAM).

In 2018, the museum was awarded an AASLH Award of Merit.

In 2018, the Institute of Classical Architecture recognized the Museum of the American Revolution with its Stanford White Award in the category of commercial, civic, and institutional architecture.

All content from Kiddle encyclopedia articles (including the article images and facts) can be freely used under Attribution-ShareAlike license, unless stated otherwise. Cite this article:
Museum of the American Revolution Facts for Kids. Kiddle Encyclopedia.