Grays Ferry, also known as Gray's Ferry, is a neighborhood in South Philadelphia bounded (roughly) by 25th Street on the east, the Schuylkill River on the west, Vare Avenue on the south, and Grays Ferry Avenue on the north. The section of this neighborhood west of 34th Street is also known as Forgotten Bottom. Grays Ferry shares borders with Southwest Center City to the North, Point Breeze to the East, and Girard Estate to the South. Gray’s Ferry is across from where Mill Creek debouches at about 43rd street. Historically, Grays Ferry was one of the largest enclaves of Irish Americans in the city, and while there are still many Irish left, it is now home to a significant African American population. 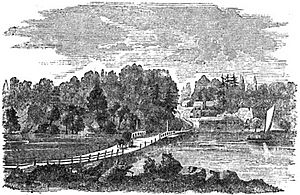 The Floating Bridge across the Schuylkill River at Gray's Ferry was originally built by the British during their 1777-78 occupation of Philadelphia. This was the primary entrance to the city for travelers from the south until it was replaced by a permanent bridge in 1838.

The area developed near an important crossing of the Schuylkill River. In the 18th century, Gray's Ferry was the southernmost of three ferries that crossed the Schuylkill River to Philadelphia. The neighborhood's namesake ferry originally belonged to a Benjamin Chambers in the 17th century. By 1747 George Gray had taken over the ferry, and established the nearby Gray's Inn and Gray's Garden, which were popular in the 1790s. The river is now spanned by the Gray's Ferry Bridge and several rail bridges.

Before the Act of Consolidation, 1854, this neighborhood was part of Moyamensing Township. Moyamensing was chartered by the Dutch governor Alexander d'Hinoyossa, and in 1684, William Penn confirmed the title.

This neighborhood was once the site of the Schuylkill Arsenal.

The Tasker Homes (also known as the Tasker Housing Project) were located at 29th and Morris Streets and visible from the Schuylkill Expressway. Originally, the housing project had 1,100 units and followed the city's general model of high-density, low-income housing. Its residents were generally low-income families who fell upon hard times or people just out of the military.

During Mayor John Street's administration, the Philadelphia Housing Authority began to remove blighted, high-density, crime-ridden housing projects and replace them with low-density, townhome-style public housing. In 2004, the Tasker Homes were demolished and replaced with the Greater Grays Ferry Estates. The new townhomes have increased tensions between working-class residents and occupants of Section 8 housing within the neighborhood. The reasons most often cited are memories of the problems with Tasker Homes, as well as the fact that many residents—white and black—do not meet income requirements for the housing.

Over the years, the neighborhood has seen numerous instances of racial violence.

As the housing market has boomed in Philadelphia, the neighborhood has begun to see some resurgence. Where the former housing projects intersect with the neighborhood, a group of neighbors have started turning an empty lot into a new park at 30th and Oakford, and the area is beginning to see a trickle of young professionals overflowing from the nearby Graduate Hospital area.

All content from Kiddle encyclopedia articles (including the article images and facts) can be freely used under Attribution-ShareAlike license, unless stated otherwise. Cite this article:
Grays Ferry, Philadelphia Facts for Kids. Kiddle Encyclopedia.