The neighborhood is named for Andrew M. Eastwick. It was largely rural until the 1920s when swampy land was dredged to create room for an airport and other large-scale uses within the city limits. Much of the original housing built before the 1950s lacked sewer service and other urban conveniences. Residents referred to the neighborhood as "The Meadows."

Residents enjoyed the ability to have a rural lifestyle within city limits; nearby creeks provided recreation in the form of swimming, bathing, and fishing. An extensive crabbing home industry was based in The Meadows.

Homes ranged from traditional single-family residences with lawns and gardens to traditional Philadelphia-style row houses; sometimes, these two housing styles appeared on the same block. Brick was the predominant material used in construction. Homes were built from the early 19th century until the Second World War caused a shortage of material for new construction.

The city of Philadelphia, which had been under Republican control in the 1940s, shifted in the 1950s toward reform Democrats, whose policies included community redevelopment.

During the late 1940s, city planners began to view Eastwick's vast and relatively open spaces as a potential solution to the problem of residential displacement from redevelopment projects planned for largely black sections of North and West Philadelphia. In 1949, the (Philadelphia Redevelopment Authority) argued that low-income blacks in these areas could be relocated to a new, planned community in Eastwick that, in the words of one commentator, "would not only siphon off the black overflow but would be a low visibility cul-de-sac into which the burgeoning Negro population could be stuffed." (McKee 552)

This plan may have ultimately led to the Authority's 1951 description of the area as "predominantly open land," despite the more than 19,000 residents, 72 percent of whom owned their own homes. (McKee 549) Opposition to the redevelopment among residents was widespread. In 1958, Art Peters wrote in the Philadelphia Tribune:

Negro and white residents of Eastwick are fighting together for what they call the "common cause." The common cause, as they see it, is to prevent at any cost the planned redevelopment of Eastwick. Almost to a man, the Eastwick residents agree that the planned redevelopment of their community will cause segregated housing in Eastwick, which for years has been thoroughly integrated and which its citizens wish to remain integrated. (quoted in McKee 556)

In 1958, Eastwick was declared the largest urban renewal project in the country, with the Korman Company making plans to replace the allegedly "poorly maintained and blighted homes" with newer, suburban-style construction in the 1960s and 70s. As Guian A. McKee writes in his study of Eastwick, the new development came at the expense of the existing community.

The pursuit of these goals brought an attendant element of tragic irony, as the project required the destruction of the area's unique existing community, which, unlike most of Philadelphia during this period, was already racially integrated. (McKee 547)

Eminent domain action led to forced relocation of most residents and widescale destruction of existing homes. The resulting open fields lay open for decades, and most of the planned development never occurred. Eventually, a limited amount of new housing was constructed, but the Korman Company had little involvement and the reason for which the neighborhood was destroyed was never realized. The housing that was built was suburban-style townhouses. The neighborhood was one of only three in Philadelphia that grew in population between 1970 and 1990. (McKee 563)

The John Heinz National Wildlife Refuge at Tinicum extends from Eastwick to Tinicum Township, Pennsylvania. Eastwick contains a large industrial area where manufacturing and distributing uses take advantage of proximity to the Airport, Interstate 95, and Center City Philadelphia. There are many gas tank farms, oil refineries, and a sewage treatment plant. The area offers affordable land for industrial uses at reportedly "one-third the cost of outlying suburbs," while enabling companies to remain in the city where employees can utilize public transit. The Route 36 SEPTA Subway-Surface Lines runs through the neighborhood, terminating at Eastwick (Subway-Surface station).

The neighborhood has been the site of controversy for a number of issues. Some blocks are located in a flood plain, leading to flooded, abandoned homes and vacant lots that are often used for illegal dumping. Issues of environmental regulation and brownfields cleanup have also figured into the history of Eastwick. The Philadelphia metropolitan area's main post office, formerly housed next to 30th Street Station, moved to a larger, auto-oriented facility in Eastwick in 2006. This move was long criticized by neighborhood groups.

Free Library of Philadelphia operates the Eastwick Branch, which serves Eastwick and other subdivisions, at 2581 Island Avenue. 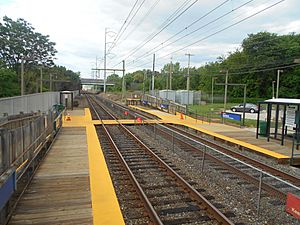 Eastwick is served by SEPTA Subway-Surface Route 36, which runs through the neighborhood and terminates at 80th Street–Eastwick station. This station is within walking distance of the Eastwick station on SEPTA Regional Rail's Airport Line; it is the only station on the line between the airport stations and Penn Medicine station.

All content from Kiddle encyclopedia articles (including the article images and facts) can be freely used under Attribution-ShareAlike license, unless stated otherwise. Cite this article:
Eastwick, Philadelphia Facts for Kids. Kiddle Encyclopedia.