Bartram's Garden is a historic garden and arboretum in Philadelphia, Pennsylvania. Founded in 1728 by botanist John Bartram (1699–1777), it is the oldest surviving botanical garden in North America. Covering 46 acres (19 ha) with an 8-acre (3.2 ha) arboretum, the garden is near the intersection of 54th Street and Lindbergh Boulevard on the west bank of the Schuylkill River.

Its John Bowman Bartram Special Collections Library contains a vast collection of documents and materials related to the history of the Garden, the history of Philadelphia, and the development of the field of botany. The non-profit John Bartram Association operates the Garden in cooperation with the Philadelphia Department of Parks & Recreation. It was designated a National Historic Landmark in 1960.

Colonial American botanist John Bartram founded the garden on his farm in Kingsessing, west of the Schuylkill River and miles outside and south of the what were then the borders of Philadelphia. He built its stone house between 1728 and 1731, added a kitchen around 1740, and installed a Palladian-inspired, carved facade between 1758 and 1770. The house still stands, as does his original garden (circa 1728) and greenhouse (1760). Three generations of the Bartram family continued the garden as the premier collection of North American plant species in the world. They sold it in 1850.

The current collection contains a wide variety of native and exotic species of herbaceous and woody plants. Most were listed in the Bartrams' 1783 broadside Catalogue of American Trees, Shrubs and Herbacious Plants and subsequent editions. 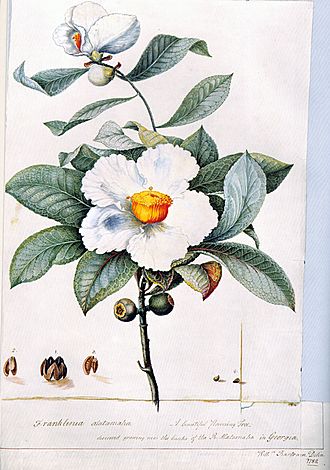 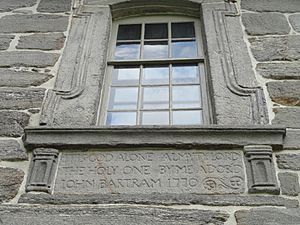 With his lifelong devotion to plants, he developed it as a systematic collection, as he devoted more time to exploration and the discovery of new North American species and examples. His development both reflected and fostered Bartram's vital scientific achievements and important intellectual exchanges with other botanists. Although it was not the first botanic collection in North America, by the middle of the eighteenth century, Bartram's Garden contained the most varied collection of North American plants in the world. John Bartram also operated a lucrative business centered on the transatlantic transfer of plants.

Following the American Revolution, Bartram's sons William Bartram (1739–1823) and John Bartram, Jr. (1743–1812) continued the international trade in plants. They expanded the family's botanic garden and nursery business. Following his father's lead, William became an important naturalist, artist, and author in his own right. Under his influence, the garden became an educational center that aided in training a new generation of natural scientists and explorers. The garden also became well known throughout the young nation. While Philadelphia was the temporary capital, visitors to the garden included members of the Continental Congress in 1784 and President George Washington in 1787. William Bartram's travel book, published in 1791, chronicled his explorations in the South and remains a milestone in American literature.

In 1850, financial difficulties resulted in the family selling the historic garden to Andrew M. Eastwick (1811–1879), who preserved it as a private park for his estate. Upon Eastwick's 1879 death, a campaign in Philadelphia to preserve the garden was organized by botanist Thomas Meehan (1826–1901). A national campaign for funds was aided by Charles S. Sargent of the Arnold Arboretum in Boston, Massachusetts. In 1891, control of the site was turned over to the City of Philadelphia.

It remains protected as a city park. Since that time, the John Bartram Association, formally organized in 1893, has overseen preservation efforts and historical interpretation of the garden, the John Bartram House, and a number of surviving outbuildings. The garden was designated as a National Historic Landmark in 1960.

The garden's plant collection includes only a few extant examples dating from the Bartram family occupancy; however, documentation for what was once in cultivation is rich. The first century of public ownership left the garden wanting in terms of care and interpretation. Despite the disappearance of a number of subsidiary physical elements in the landscape, the garden's rectilinear framework, designed and laid out by Bartram during the second quarter of the eighteenth century, is still recognizable. Bartram's Garden's physical endurance and resonant associative meanings make the site an unparalleled location for comprehending an array of historical facets related to John Bartram, eighteenth- and nineteenth-century botanic studies, the North American plant and seed business, and period domestic life in Philadelphia.

Digital panoramic photo of the west-facing side of the Bartram House (center) taken August 2017.

All content from Kiddle encyclopedia articles (including the article images and facts) can be freely used under Attribution-ShareAlike license, unless stated otherwise. Cite this article:
Bartram's Garden Facts for Kids. Kiddle Encyclopedia.