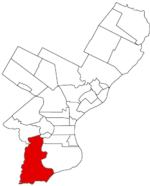 Southwest Philadelphia (formerly Kingsessing Township) is a section of Philadelphia, Pennsylvania, United States. The section can be described as extending from the western side of the Schuylkill River to the city line, with the SEPTA. The northern border is defined by the Philadelphia City Planning Commission as east from the city line along Baltimore Avenue moving south along 51st Street to Springfield Ave. It follows the train tracks until 49th Street. From 49th and Kingsessing Ave the line moves east along Kingsessing Ave. The line then moves south along 46th St to Paschall Ave where it jogs to join Grays Ferry where the line runs to the Schuylkill River.

Kingsessing Township was a township in the extreme southwestern portion of the county, roughly encompassing what is now known today as Southwest Philadelphia. It was bounded on the north by Blockley Township; on the east by Mill Creek and Schuylkill River; on the south by Delaware River and Bow Creek; and on the west by Darby Creek and Cobbs Creek. It embraces the site of the old village of Kingsessing. The township contained no other settlements of any size except Maylandville. It was traversed principally by the Darby Road and the road to Lazaretto. Its greatest length, 5 miles (8.0 km); greatest breadth, 2 1⁄2 miles (4.0 km); area, 6,800 acres (28 km2). This was the oldest settled portion of the county of Philadelphia.

The Kingsessing settlement was started by Swedes who settled the colony of New Sweden. Most of the settlers were Finns. Dating to 1646, it was the first village settled by Europeans within the territory of Philadelphia. Fort Nya Vasa at Kingsessing, was located on the eastern-side of Cobbs Creek near Cobbs Creek Parkway and Greenway Avenue.

The township of Kingsessing was created not long after control of the colony was transferred to William Penn. The township and village were incorporated into the City of Philadelphia following the Act of Consolidation, 1854.

A number of SEPTA Subway-Surface Trolley Lines traverse the area along Chester, Woodland, and Elmwood Avenues, providing easy access to Center City through the 40th Street Portal. These also extend to Darby and Yeadon.

Philadelphia International Airport, a number of oil refineries, and many heavy industrial uses are located in the Southwest section. The housing stock is diverse with ornate Queen Anne style twin mansions in the neighborhoods bordering Cedar Park, plainer and simpler styles of twins predominating closer to the airport, and newer rowhouses, many with porches, filling in many neighborhoods. The South Philadelphia Sports Complex is very close to Southwest Philadelphia.

Less than 1% of Southwest is covered by trees, giving it one of the lowest ratios of shade tree cover in the city.

All content from Kiddle encyclopedia articles (including the article images and facts) can be freely used under Attribution-ShareAlike license, unless stated otherwise. Cite this article:
Southwest Philadelphia Facts for Kids. Kiddle Encyclopedia.