Kingsessing is a neighborhood in the Southwest section of Philadelphia, Pennsylvania, United States. On the west side of the Schuylkill River, it is next to the neighborhoods of Cedar Park, Southwest Schuylkill, and Mount Moriah, as well as the borough of Yeadon in Delaware County. It is roughly bounded by 53rd Street to the northeast, Baltimore Avenue to the northwest, Cobbs Creek and 60th Street to the southwest, and Woodland Avenue to the southeast. 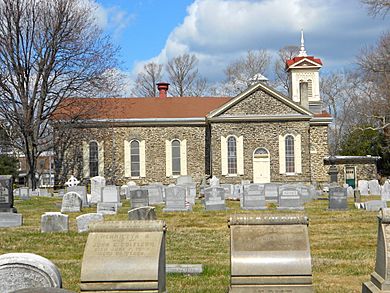 The S. Weir Mitchell School was added to the National Register of Historic Places in 1986.

All content from Kiddle encyclopedia articles (including the article images and facts) can be freely used under Attribution-ShareAlike license, unless stated otherwise. Cite this article:
Kingsessing, Philadelphia Facts for Kids. Kiddle Encyclopedia.