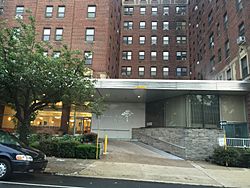 The Walnut Park Plaza is located in the Cobbs Creek neighborhood.

Philadelphia architect William Alesker, who was involved in the plans for a Trump Tower in Center City, and Evangelical minister Tony Campolo, one of Bill Clinton's spiritual advisers, lived, respectively, in the 6200 blocks of Pine and Delancey Streets back in the 1940s and 1950s.

Fires from the 1985 bombing of the MOVE headquarters at 6221 Osage Avenue spread to 64 other buildings in the neighborhood. The destroyed homes were hastily rebuilt by the city, but were later condemned after years of attempted repairs to the shoddy construction.

Also listed on the National Register of Historic Places are the Holmes Junior High School and Walnut Park Plaza Hotel.

In 2011 the Roman Catholic Archdiocese of Philadelphia announced the closures of St. Cyprian Catholic School, as its student numbers had declined.

Free Library of Philadelphia operates the Blanche A. Nixon/Cobbs Creek Branch at 5800 Cobbs Creek Parkway at the intersection of 59th Street and Baltimore Avenue. The branch opened in 1925 and was renamed in 1990 after an area activist.

All content from Kiddle encyclopedia articles (including the article images and facts) can be freely used under Attribution-ShareAlike license, unless stated otherwise. Cite this article:
Cobbs Creek, Philadelphia Facts for Kids. Kiddle Encyclopedia.