The John Heinz National Wildlife Refuge at Tinicum is a 1000-acre (4.05 km2) National Wildlife Refuge spanning Philadelphia and Delaware counties in Pennsylvania. Located in Tinicum Township, the refuge is adjacent to the Philadelphia International Airport. Established in 1972 as the Tinicum National Environmental Center, it was renamed in 1991 after the late H. John Heinz III who had helped preserve Tinicum Marsh.

The refuge serves to protect the largest remaining freshwater tidal marsh in Pennsylvania; approximately 350 acres (0.8 km2). When land acquisition is complete, the refuge will consist of 1200 acres (4.9 km2) of varied habitats. 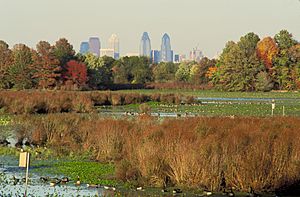 Philadelphia is easily visible from the refuge.

The history of Tinicum Marsh, the largest remaining freshwater tidal wetland in Pennsylvania, goes back to 1634 and the region's first settlements. Dutch, Swedish and English settlers diked and drained parts of the marsh for grazing. At that time, the vast tidal marshes stretched over 5,700 acres (23 km2). Rapid urbanization since World War I has reduced tidal marshes to approximately 200 acres (0.8 km2). The remnant of this once vast tidal marsh is protected by the refuge.

A diked, non-tidal area of 145 acres (0.6 km2), adjacent to the eastern end of Tinicum marsh, was donated by the Gulf Oil Corporation to the City of Philadelphia in 1955. This area, administered for the benefit of wildlife and people, was known as Tinicum Wildlife Preserve. The areas of open water along with the adjacent heavily vegetated tidal wetlands, formed an ideal habitat for thousands of migratory waterfowl.

The marsh was declared a National Natural Landmark in 1965. In 1969, the remaining area was threatened by plans to route Interstate 95 through it and by a sanitary landfill on the tidal wetlands. These activities started a long series of injunctions, public hearings and extraordinary efforts by private and public groups to secure rerouting of the highway (completed in 1985) and termination of the landfill operation.

Among these groups was The Philadelphia Conservationists, a group of bird watchers who, following the success of efforts to protect the marshes at Tinicum, went on to conserve natural areas along the east coast and were incorporated in 1961 as Natural Lands Trust, a conservation organization that continues to conserve and steward open land in Pennsylvania and New Jersey out of its headquarters in Media, Pennsylvania. Under legislation passed by Congress in 1972, authorization was given to the Secretary of the Interior to acquire 1200 acres (4.9 km2) to establish the Tinicum National Environmental Center. In November 1991, in a bill sponsored by Congressman Curt Weldon (R-PA), the name of the refuge was changed to John Heinz National Wildlife Refuge at Tinicum to honor the late Senator who helped preserve Tinicum Marsh.

The refuge has five varied habitats: freshwater tidal marsh, impounded water, woods, meadow and field. The diversity of such habitats in such a concentrated area make it a natural magnet for all forms of wildlife. In addition to the above-mentioned there are a wide variety of fish species that can be found in both, Darby Creek, the lifeblood of Tinicum Marsh, as well as the 145 acre (0.6 km2) impoundment and the smaller, Hoy's Pond. They include brown bullhead, channel catfish, crappie, carp and small striped bass that utilize the wider expanses of Darby Creek, just before its confluence with the Delaware River, in the earlier stages of their development. The fields and meadows provide open areas where wide arrays of insects including several species of butterflies can be found foraging the dozens of species of wildflowers.

The Refuge is home to a variety of wildlife despite its urban location. Birdwatchers have recorded over 300 species of birds in and around the Refuge, 85 of which nest here. Migratory birds like warblers, egrets, sandpipers, and a large variety of ducks, within the Atlantic Flyway, use the refuge as a resting/feeding spot during spring and fall flights. Since water levels can be controlled in the impoundment, the water is often drained in early fall at the refuge. This serves both to reduce the large population of invasive carp and makes the impoundment a large mudflat, which renders it very attractive to migrating shorebirds. The water levels is raised later in the fall so waterfowl can use the impoundment.

Bats are frequently observed by visitors on the refuge during warmer seasons and a formal species diversity and population survey would provide valuable information on recent declines of these important creatures due to white nose syndrome and habitat disturbances.

There are several species of reptiles and amphibians that call the refuge home including the northern water, garter and Northern brown snakes; pickerel, wood and southern leopard frogs (the latter listed as endangered in Pennsylvania) and the state threatened American red-bellied turtle as well as the painted, snapping and eastern box turtles.

John Heinz National Wildlife Refuge at Tinicum lies in the transition zone between the Temperate Continental climate to the north and the Humid subtropical climate to the south. According to the Trewartha climate classification system, the refuge has a Temperate Oceanic climate (Do) with hot summers (a), cool winters (k) and year-around precipitation. Doak climates are characterized by all months having an average mean temperature > 32.0 °F (0 °C), four to seven months with an average mean temperature ≥ 50.0 °F (10 °C), at least one month with an average mean temperature ≥ 72.0 °F (22 °C) and no significant precipitation difference between seasons. Although most summer days are moderately humid at John Heinz National Wildlife Refuge, episodes of heat and high humidity can occur with heat index values > 111 °F (44 °C). Since 1981, the highest air temperature was 102.9 °F (39 °C) on 07/22/2011, and the highest average mean dew point was 77.3 °F (25 °C) on 07/15/1995. The average wettest month is July which corresponds with the annual peak in thunderstorm activity. Since 1981, the wettest calendar day was 6.58 inches (167 mm) on 08/27/2011. During the winter months, the plant hardiness zone is 7a with an average annual extreme minimum air temperature of 5.1 °F (−15 °C). Since 1981, the coldest air temperature was −5.8 °F (−21 °C) on 01/22/1984. Episodes of extreme cold and wind can occur with wind chill values < −5 °F (−21 °C). Ice storms and large snowstorms depositing ≥ 12 inches (30 cm) occur once every several years, particularly during nor’easters from December through February. 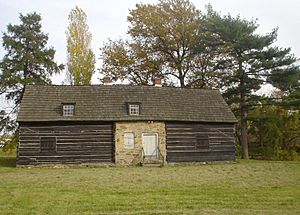 There are over 10 miles (16 km) of trails, including the popular "Impoundment Trail", and two boardwalks that cross the impoundment and one of its smaller coves. Trail segments are a part of the East Coast Greenway, a 3,000 mile long system of trails connecting Maine to Florida.

A 4.5-mile (7.2 km) segment of Darby Creek flows through the refuge allowing canoeists to see a variety of plants and animals.

Points of interest around the Creek's deep water lagoon are:

Fishing is permitted along the main dike trail and the connecting Trolley Bed trail. This area provides fishing in both the 145 acre (0.6 km2) impoundment and Darby Creek. Common fish are carp, catfish, large-mouth bass and smaller panfish. Another fishing area is near Tinicum and Prospect Park on the west side of Route 420 which provides access to the lagoon areas of the Refuge. Common fish in this area are striped bass, carp, catfish, panfish, and tiger musky. However, due to the preserve's urban location, the stream has been polluted with various industrial chemicals. As a result, signs have been put into place in order to discourage the consumption of the fish that reside in the stream.

All content from Kiddle encyclopedia articles (including the article images and facts) can be freely used under Attribution-ShareAlike license, unless stated otherwise. Cite this article:
John Heinz National Wildlife Refuge at Tinicum Facts for Kids. Kiddle Encyclopedia.